Top Headlines
Home » National » Sardar Patel is the leader whom I admire the most, says Vice President 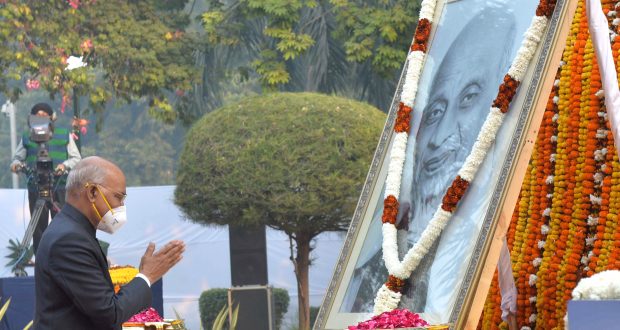 Sardar Patel is the leader whom I admire the most, says Vice President

in National October 31, 2020 Comments Off on Sardar Patel is the leader whom I admire the most, says Vice President 494 Views

New Delhi:31/10/20:The Vice President, Shri M. Venkaiah Naidu paid his rich tributes to the Unifier of India, Sardar Vallabhbhai Patel on his birth anniversary today. The Vice President said that Sardar Patel is the leader he admired the most.

In a Facebook post today the Vice President recalled the great contributions made by Sardar Vallabhbhai Patel and urged the citizens of the country, particularly the younger generation to revisit his legacy and remember his unparalleled contribution to building a modern India.

Shri Naidu praised Sardar Patel for his monumental achievement of unification of India. He mentioned how at a critical juncture, Sardar Patel used his sagacity, ingenuity, skill, experience and grit to safeguard India’s territorial unity and integrity. He said, “Through meticulous planning, negotiations, counseling, and tactful handling, he brought together all the princely states in one of the greatest accomplishments in modern history.”

Mentioning the creation of All India Civil Services, the Vice President said that it was another illustrious contribution made by Sardar Patel. He said that Patel had envisioned these services as the Steel frame of India that would further safeguard the country’s unity and integrity. “Patel considered the officers of the Services as partners in administration and expected them to maintain the highest standards of integrity and honesty,” he added.

The Vice President mentioned that Patel earned the reputation of ‘Iron Man’ because of the manner in which he brought about and maintained internal stability as the Home Minister in the wake of the partition of the country.

Highlighting some of the great qualities of Sardar Patel, the Vice President said, “His love for motherland, leadership qualities, simplicity, honesty, integrity, down-to-earth nature, pragmatic approach to resolving knotty problems, earthly wisdom, discipline, and organizing skills will always remain an inspiration for every Indian.” He further called upon every citizen to work together towards realizing the dream of Sardar Patel.

Expressing his strong desire, the Vice President said, “I would like to state my fervent wish of making every child familiar with the life and contribution of Sardar Vallabhbhai Patel. Similarly, every civil servant must read his speeches and every politician must imbibe great qualities of Patel like integrity, firmness and keeping people’s interest at heart.”

2020-10-31
Editor in chief
Previous: Prime Minister interacts with Officer Trainees of Indian Civil Services in the second edition of the Integrated Foundation Course, ”Aarambh”
Next: ‘Mo Bus’ services will resume on 17 routes from November 2 onwards