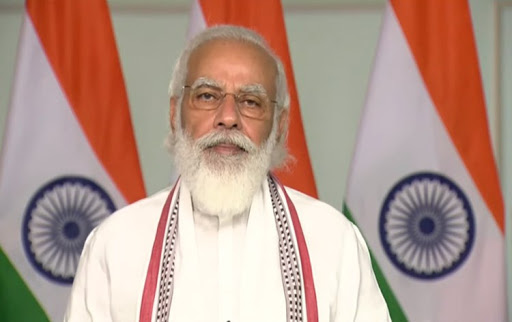 in National October 27, 2020 Comments Off on India has Zero Tolerance Approach to Corruption: PM 417 Views

New Delhi;27/10/20: The Prime Minister inaugurated the National Conference on Vigilance and Anti Corruption on the theme सतर्क भारत, समृद्ध भारत (Vigilant India, Prosperous India) today through video conferencing. The event was organized by the Central Bureau of Investigation focusing on Vigilance issues aimed at raising awareness and reaffirming India’s commitment to the promotion of integrity and probity in public life through citizen participation.

Addressing the Conference, the Prime Minister said Sardar Patel is the architect of United India as well the country’s administrative systems. As the first home minister of the country, he made efforts to build such a system that is meant for the common man of the country and where the policies are based on integrity. Shri Narendra Modi lamented that the following decades witnessed a different situation which leads to scams worth thousands of crores of rupees, the establishment of shell companies, tax harassment and tax evasion,

The Prime Minister said in 2014 when the country decided to make a major change and to move in a new direction, there was a big challenge in changing this environment. He added the constitution of the committee against black money was in limbo despite the Supreme Court’s directions. The committee was formed immediately after the formation of this Government. This shows the commitment of the government against corruption. He said since 2014 the country witnessed reforms in many sectors including banking sector, health sector, education sector, Labour, Agriculture, etc. He said based on these reforms, the nation is now moving ahead with its full strength to make the AtmaNirbhar Bharat campaign successful. He envisioned making India one of the leading countries in the world.

The Prime Minister stressed the necessity for the administrative systems to be transparent, responsible, accountable, answerable to the public. He added that the biggest enemy against this is any form of corruption. He said one hand corruption hurts the development of the country and on the other, it destroys the social balance as well as the trust that people should have in the system. And therefore, he said tackling corruption is not just the responsibility of any single agency or institution but that it is a  collective responsibility. He said corruption cannot be dealt with a stand-alone approach.

He said When it is the question of the country, then the scope of vigilance becomes very expansive. Be it corruption, economic offenses, drug networks, money laundering, terrorism, terror funding, it has been seen quite often that they are all linked.

He said hence there is a need for systematic checks, effective audits, and capacity building and training with a holistic approach to fight corruption. The Prime Minister emphasized that it is the need of the hour that all agencies work with synergy and a cooperative spirit.

The Prime Minister recalled what he said during the 2016 Vigilance awareness program that corruption does not have even an iota of place in our country which is fighting poverty. He said that for decades, the poor did not get their entitlements but now owing to the DBT the poor are directly receiving their benefits. He said owing to  DBT alone more than Rs 1.7 lakh crore are being saved from getting into the wrong hands.

He expressed satisfaction that people’s faith in the institutions is being restored again.

He stressed that there should be neither any strong interference from the government nor an absence of Govt. The government’s role should be limited to the extent that is needed. People should not feel that the Govt is unnecessarily interfering or that the govt is not acting when needed.

Shri Modi said that over the last few years more than 1500 laws have been abolished and many rules simplified. He said that many applications for pension, scholarship, passport, startup, etc. have been made online to reduce the hassle to the common people.

2020-10-27
Editor in chief
Previous: Odisha Celebrates Victory Of Good Over Evil
Next: Call on Prime Minister by the Secretaries of State and Defence of USA