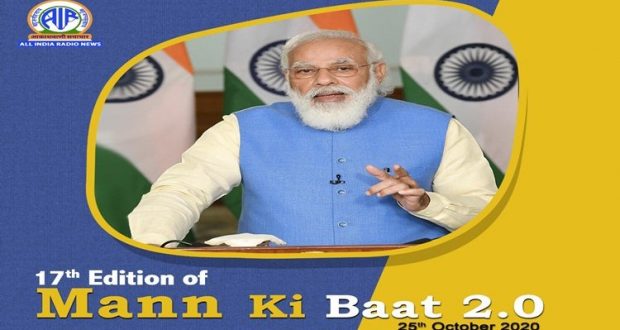 in National October 25, 2020 Comments Off on Prime Minister Narendra Modi has urged the people of the country to give priority to local products 242 Views

New Delhi:25/10/20: Prime Minister Narendra Modi has urged the people of the country to give priority to local products while shopping during this festive season. Addressing the nation through his Mann Ki Baat programme on All India Radio this morning, Mr Modi asked everyone to remember the resolve of Vocal for Local.

He said the whole world is becoming fan of Indian products. He stressed that many local products have the potential of becoming global and gave the example of Khadi. He said Khadi has remained an icon of simplicity for a long time but is now getting recognized as an eco friendly fabric. He added that Khadi is body friendly and an all weather fabric which has also become a fashion statement.

The Prime Minister said Pulwama in Kashmir is playing an important role in educating the entire country. He said that India used to import wood for pencils from abroad, but now Pulwama is making the country self-sufficient in the field of pencil making.  Chinar wood of  the valley has high moisture content and softness, which makes it most suitable for the manufacture of pencils. In Pulwama, Oukhoo is known as the Pencil Village. Here, several manufacturing units of Pencil Slats are providing employment to hundreds including a large number of women.

The Prime Minister said one should remember the time of Lockdown in the midst of this festive celebration. During this period, people realised how difficult it is without cleanliness workers, local vegetable sellers, milkmen and security guards. He urged everyone to include them in festivities as they must not only be remembered during difficult times.

Mr Modi also asked people to remember the brave soldiers who are guarding the country’s borders and light a lamp in their honour. He assured soldiers that the entire country is wishing well for them even though they are far away from home. He saluted the sacrifice of the families whose children are on the border today. He expressed gratitude to each and every person who is away from home and family on account of discharging duty to the country in one way or the other.

The Prime Minister said Sardar Vallabh Bhai Patel’s birth anniversary will be celebrated on the 31st of October. This day is also known as ‘National Unity Day’. He said Sardar Patel had a great sense of humour. Mr Modi asked people to keep their sense of humour alive irrespective of how difficult the situations are. He said Sardar Patel devoted his entire life for the unity of the country and integrated the Indian public with the Freedom Movement. Mr Modi said Sardar Patel worked for the integration of the Princely States with the nation. He said citizens should carry forward the entire spectrum of values that unite people through speech, bearing and actions.

The Prime Minister said that the country has given a befitting reply every time to the forces which continuously try to sow the seeds of suspicion in people’s minds, and divide the country. Giving the motto of Ek Bharat Shrestha Bharat, Mr Modi urged everyone to visit the website – ekbharat.gov.in. This website displays the efforts made to advance the campaign of national integration. It also has an interesting corner -The sentence for the day. In this section, people can learn how to speak a sentence in different languages every day. The Prime Minister also asked people to share recipes of local food items along with the names of the local ingredients, on the ‘Ek Bharat Shreshtha Bharat’ website.

Mr Modi also said that he will attend many events on 31st October to be held in and around the historic Statue of Unity in Kevadiya.  ‘Valmiki Jayanti’ will also be celebrated on the 31st of October. Mr Modi paid his obeisance to Maharishi Valmiki saying that he was a beacon of great hope for millions of the impoverished and Dalits. The Prime Minister also offered his tributes to former Prime Minister of India, Indira Gandhi whose death anniversary is on 31st of October.

2020-10-25
Editor in chief
Previous: Redevelopment of Swargadwar constitutes an important part of the 5T initiative
Next: India has crossed a significant milestone in its fight against COVID