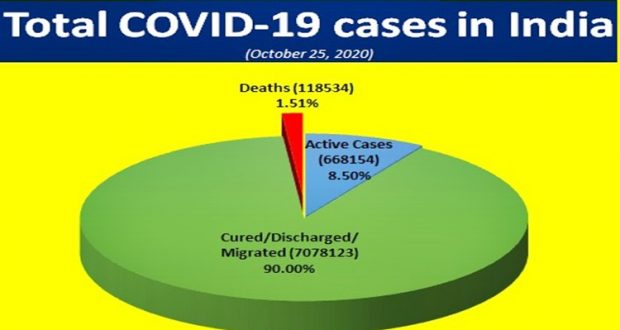 India has crossed a significant milestone in its fight against COVID

in National October 25, 2020 Comments Off on India has crossed a significant milestone in its fight against COVID 310 Views

New Delhi:25/10/20: India has crossed a significant milestone in its fight against COVID, as the recovery rate has reached 90 percent Today. Over 70 lakh 78 thousand patients have recovered from this highly infectious disease in the country so far. The active caseload of the country has also fallen below 8.5 percent. The total positive cases in the country today stand at six lakh 68 thousand 154 which comprises merely 8.49 percent of the total reported cases.

With a high number of COVID patients recovering every day along with a steadily falling and sustained low mortality rate, India’s trend of decreasing active cases continues. The recovered cases are nearly 10.6 times more than active cases. Nearly 62 thousand patients recovered and were discharged in the last 24 hours whereas the new confirmed cases reported in the same time span stood at around 50 thousand.

The Health Ministry said that enhanced countrywide medical infrastructure, implementation of the Centre’s Standard Treatment Protocol by all the States and Union Territories, and total dedication and commitment of doctors, paramedics, and frontline workers have led to a persistent increase in the number of total recoveries in the country. It said this has also led to a commensurate dip in the fatality rate which stands at 1.51 percent.

The Health Ministry informed that 578 deaths were reported in the past 24 hours of which nearly 80 percent are concentrated in ten States and Union Territories.

During the last 24 hours, nearly 11 lakh 41 thousand COVID samples were tested in the country. With this, the cumulative testing figure has further risen to over 10 crores 25 lakhs. The Health Ministry has said India has come a long way from just one COVID testing lab in January this year to around 2003 such labs today.

2020-10-25
Editor in chief
Previous: Prime Minister Narendra Modi has urged the people of the country to give priority to local products
Next: President, Vice President and Prime Minister greet nation on the occasion of Dussehra