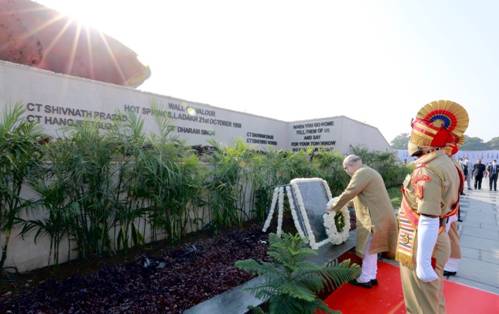 in National October 21, 2020 Comments Off on Union Home Minister laid a wreath and paid tributes to martyred policemen on Police Commemoration Day 272 Views

New Delhi:21/10/20 Union Home Minister Shri Amit Shah laid a wreath and paid tributes to martyred policemen on Police Commemoration Day at the National Police Memorial in New Delhi today. In his address, Shri Shah said I offer tributes with a sense of indebtedness on behalf of the entire nation for the supreme sacrifice of our police personnel for the security, integrity and unity of the country. Union Home Minister also paid homage to the martyred police personnel on behalf of Prime Minister, Shri Narendra Modi and the Council of Ministers.

Union Home Minister said that in 2014, when Shri Narendra Modi became the Prime Minister of the country, his government decided to build a memorial that would remind the people about the sacrifice of police personnel. On 21 October 2018, the Prime Minister dedicated the memorial to the nation. The construction of the National Police Memorial is a meaningful and serious effort of the Modi Government to change the attitude of the public, especially the future generations towards the police force.https:/

Shri Amit Shah said that he wanted the families of the martyred policemen to know that it is not only the names of martyrs inscribed on the Police Memorial but also the feelings of we 130 crore Indians. This monument is not just made of bricks, stones and cement, this monument always reminds us about the supreme sacrifice of our brave personnel that has given permanence to the nation’s Independence. Union Home Minister said that every drop of martyred policemen’s blood has paved the path for the country’s progress. It has shaped the future of many youngsters and has paved the way for the progress of the country. Shri Amit Shah also said that it is due to the supreme sacrifice of our immortal heroes that we countrymen sleep peacefully. He said 264 CAPF and police personnel were martyred this year and so far 35,398 brave police personnel have laid down their lives for the country.

The Union Home Minister said police personnel have to work relentlessly 24×7 on 365 days even during festivals.

Police Commemoration Day is observed on 21 October in memory of the ten police personnel who were martyred in an ambush by heavily armed Chinese troops in Hot Springs in Ladakh on this date in 1959.