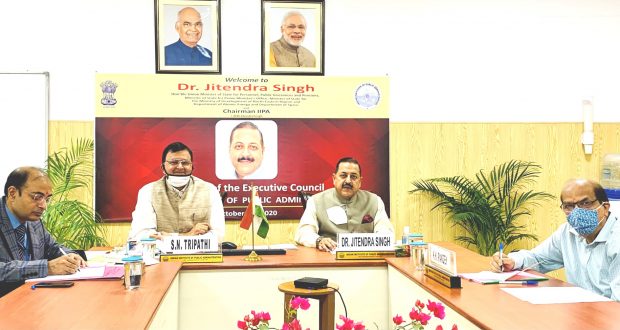 Pertinent to mention that the post of Chairman IIPA had fallen vacant after the demise of T N Chaturvedi, a 1949 batch IAS officer, former Comptroller & Auditor General (CAG) of India and former Governor, who had taken over as Chairman of the IIPA in 2004 and continued to hold this position for sixteen years till his death on 5th January 2020.

The proceedings of the Executive Council meeting today were conducted by S N Tripathi, former Secretary in Government of India and presently Director IIPA, who has been hereafter re-designated as Chief Executive Officer (CEO) of the IIPA.

Speaking on the occasion, Dr Jitendra Singh expressed his thanks to the Executive Council Members for having entrusted him with the responsibility of the Chairman of IIPA and hoped that with their support and guidance he will be able to do his best and live up to their expectations.

In his first Executive Council Meeting after taking over as Chairman, Dr. Jitendra Singh made the important announcement that the Life Membership of IIPA will be thrown open w.e.f. 1st January 2021. He also called upon more number of serving officers to take up the membership of IIPA and noted that the government service rules do not forbid a serving official to become a member of IIPA.