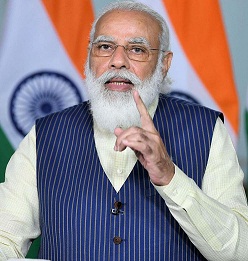 in National October 20, 2020 Comments Off on PM appeals to citizens to not let their guard down in the country’s fight against Corona 249 Views

New Delhi:20/10/20: In a televised address to the nation, Prime Minister Shri Narendra Modi made a fervent appeal to all the citizens to not let their guard down and become complacent, in the country’s ongoing fight against the Covid Pandemic.

Shri Narendra Modi said despite the lockdown having been lifted it does not mean that the Corona Virus is wiped out.

He appreciated the improvement in the situation all over the country and that economic activity is returning to normal and that people started moving out of their houses to fulfill the responsibilities.

Shri Modi observed that markets have also started returning to normalcy with the advent of the festivities.

He said India is in a better situation due to the efforts of every Indian in the last 7-8 months and one should not let it deteriorate.

The Prime Minister noted that the recovery rate in the country has improved and the fatality rate is low. Shri Modi stated that for every 10 Lakh citizens about 5500 were infected with corona, while in countries like the US and Brazil the figure is nearly 25000.

He said that the death rate in India is 83 for every 10 Lakh citizens, whereas in developed countries like the US, Brazil, Spain, Britain and many other countries it is about 600.

The Prime Minister appreciated that in comparison to many developed nations, India is getting successful in protecting many lives of its citizens in the country.

The Prime Minister mentioned the improvement of the Covid Infrastructure in the country. He said more than 90 Lakh beds are available for corona patients along with 12000 Quarantine centers across the country.

He said over 2000  Corona Testing 2000 labs are functional all over the country, while the number of tests will soon cross 10 Crore.

He said India is succeeding in saving the lives of more and more of its citizens in comparison to the resource-rich countries and that the increasing number of tests has been a great strength in the country’s fight against the Covid pandemic.

The Prime Minister lauded the efforts of the doctors, nurses and health workers who are selflessly serving such a large population, following the mantra of “Seva Parmo Dharma.”

He warned people not to be callous, amidst all these efforts and not to assume that the coronavirus is gone, or that there is no danger from the corona now.

Cautioning the people who have stopped taking precautions of late, he said “If you are negligent and going out without a mask, you are exposing yourself, your family, your children, the elderly to the same amount of risk.”

The Prime Minister referred to the ongoing situation in the US and Europe where the number of cases of Corona initially decreased but then suddenly started increasing.

He urged the people not to be negligent until a vaccine against the pandemic is found and led the fight against the Covid-19 weaken.

The Prime Minister said efforts are on a war footing to save humanity and many countries including the country’s scientists are working on the production of a vaccine.

He said the work is going on various vaccines against corona and that some of these are in an advanced stage.

The Prime Minister said the Government is also preparing a detailed road map to reach the vaccine to every single citizen as soon as it is readily available.

He again urged the people to not lax until the vaccine is done.

The Prime Minister said we are going through a difficult time and a little carelessness can lead to a great crisis and tarnish our happiness.

He urged citizens to be vigilant while fulfilling their responsibilities.

He appealed to the citizens to maintain the 6 feet distance (Do Gaj ki Doori), to wash their hands with soap periodically, and to wear face masks.

2020-10-20
Editor in chief
Previous: JSPL produced rails for high-speed corridors approved by Indian Railways
Next: The 6th India International Science Festival to be held in Virtual format from 22nd to 25th December, 2020