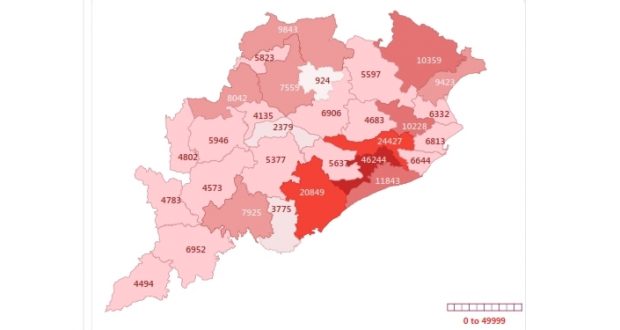 Odisha reported its another lowest single-day spike which pushed the total caseload to 270346.

in State News October 19, 2020 Comments Off on Odisha reported its another lowest single-day spike which pushed the total caseload to 270346. 290 Views

Bhubaneswar19/10/20:: Odisha reported its another lowest single-day spike of 1982 new cases on Monday which pushed the total caseload to 270346.

At least 17 persons succumbed to the disease while undergoing treatment at various hospitals. With this, the death toll due to Covid-19 rose to 1152, informed the Health and Family Welfare Department.

Of the new positive cases, 1156 patients are from quarantine while 826 are local contact cases. Four districts recorded over 100 cases with Khordha witnessing the maximum of 300 positive cases followed by Cuttack (145), Angul (119), and Mayurbhanj (107). The Health Department said while three deaths were reported from Cuttack and Khordha, two deaths each recorded in Bolangir, Jharsuguda and Sonepur districts and one death each in Bargarh, Boudh, Jagatsinghpur, Mayurbhanj and Nuapada districts.

Active cases now stood at 22304 while 246837 have so far recovered from the disease, data released by the State I& PR Department said.

Official reports reveal that 38740 samples were tested on Saturday for Covid taking the number of samples tested cumulatively across the State to 4082063.