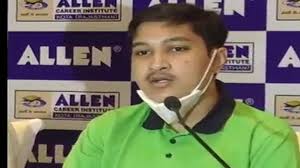 Bhubaneswar:17/108/20:Shoyeb Aftab has bagged All India Rank (AIR) 1 in NEET 2020 result announced by the National Testing Agency (NTA) on its website ntaneet.nic.in. According to a report, Shoyeb Aftab has secured a full 720 out of the total 720 marks in the medical entrance exam.

The NEET 2020 topper, 18-year-old Shoyeb created a record by securing 100 percent marks and is also the first student from the state of Odisha to top NEET.

Shoyeb took coaching in ALLEN from an institute in Kota, Rajasthan. The coaching institute also tweeted pictures of Shoyeb ahead of the result declaration as the student had already worked out that he may score full marks, based on the answer key that was released in the public domain earlier.

He also met Lok Sabha speaker and Member of Parliament from Kota, Om Birla on Thursday.

The Phase 2 exam was conducted on 14 October after the Supreme Court of India gave its approval to hold the exam for candidates who missed the medical entrance test due to COVID-19 or were stuck in containment zones.

Earlier today, NTA released the final answer keys of NEET 2020 based on which the results have been declared.

NEET is conducted every year for admission to medical and allied courses across the country. On the basis of marks, students are admitted to 80,005 MBBS, 26,949 BDS, 52,720 AYUSH and 525 BVSc and AH seats in medical and dental colleges.

NEET 2020 score will be required for admission in 15 AIIMS and two JIPMER institutes.