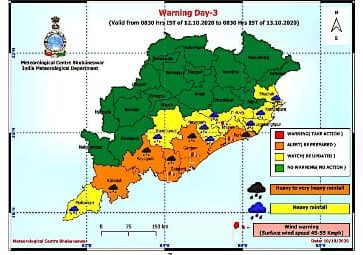 Several parts of Odisha are likely to experience heavy rainfall

in State News October 10, 2020 Comments Off on Several parts of Odisha are likely to experience heavy rainfall 278 Views

Bhubaneswar:10/10/20: Several parts of Odisha are likely to experience heavy rainfall from Saturday afternoon under the influence of the well-marked low-pressure area over the Bay of Bengal, which is likely to concentrate into a depression in the next 24 hours.

According to India Meteorological Department (IMD) midday bulletin, the well-marked low-pressure area over east-central Bay of Bengal and adjoining north Andaman Sea now lies over East-central and adjoining Southeast Bay of Bengal. “The associated cyclonic circulation extends up to mid­tropospheric levels. It is very likely to concentrate into a depression over the central Bay of Bengal during the next 24 hour. It is very likely to move west­northwestwards and cross north Andhra Pradesh coast as a Depression during October 12 morning,” it added.

he IMD has issued yellow and orange warning of heavy rainfall from 1.30 pm of Saturday (October 10) till 8.30 of October 14. 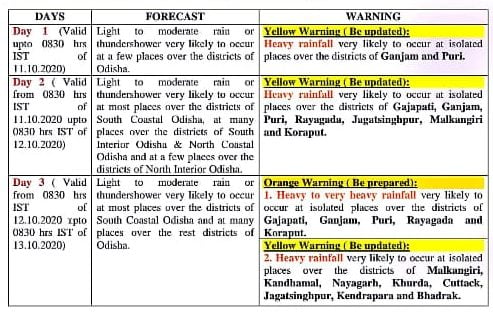 Fishermen have been advised not to venture into deep sea areas of central Bay of Bengal till October 13.