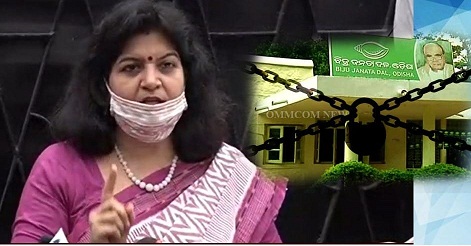 in State News October 10, 2020 Comments Off on Office of BJP’s Bhubaneswar MP, Aparajita Sarangi was sealed:Ms. Sarangi hold press coference in front of her office 541 Views

Bhubaneswar:10/10/20: Hours after the office of BJP’s Bhubaneswar MP, Aparajita Sarangi was sealed by the Bhubaneswar Municipal Corporation (BMC) for alleged COVID19 norm violation, the parliamentarian hit back at the BJD questioning when the ruling party’s office will be sealed despite the fact that there have been flagrant violations.

Addressing a presser outside her sealed office in Palaspalli area, Sarangi showed 17 photographs and a video as evidence of Covid-19 guideline violations by the BJD MLAs, ministers & party workers.

Sarangi showed a picture of crowd gathered at the BJD office and at the funeral of party MLA Pradeep Maharathy. She alleged Minister Samir Dash who had gone to the funeral of Maharathy had not covered his face with mask.

She further alleged that the BJD leaders along with 300 people were not wearing masks during the party meeting in Tirtol recently.

“I work for 13 to 14 hours a day and reach out to the people of my constituency. PM Narendra Modi has laid down guidelines for Covid-19 and we all will follow them. Stop being vindictive,” she said.

In an apparent attack on Chief Minister Naveen Patnaik, the MP said one can not run the State by staying inside the ‘Niwas’ for seven months.

Defending the move of the BMC, BJD said the sealing of MP Aparajita Sarangi’s office was an administrative decision.

“Sealing of BJP MP Aparajita Sarangi’s office is an administrative decision and there is no say of BJD in the matter. A lot of buildings have been sealed in the past in view of public safety,” said BJD spokesperson Sulata Deo.

2020-10-10
Editor in chief
Previous: Several parts of Odisha are likely to experience heavy rainfall
Next: Odisha today reported 16 COVID-19 deaths which pushed the death toll to 1022