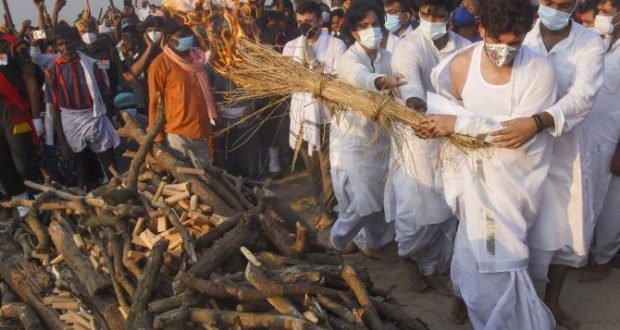 Patna:10/10/20: The last rites on mortal remains of Union Minister Ram Vilas Paswan were performed with full State honours at Janardan Ghat on the banks of Ganga in Patna. Chirag Paswan, the son of the departed leader, performed the last rites. The Guard of Honour was accorded by Jawans of Army, Navy, and Air Force at the venue of the funeral. The State Police also accorded Guard of Honour.

The Chief Minister and other prominent personalities paid their rich tributes to mortal remains of the departed leader.

Earlier, thousands of people participated in the funeral procession of the departed leader. His supporters chanted slogans in support of their leader. During the procession slogans like “Ram Vilas Amar Rahe” echoed in the surrounding.

Ram Vilas Paswan, the iconic mass leader will always be remembered for his reformatory decisions in politics and governance.

Political Pundits will remember him as a politician who had a unique kind of intuitive sense about the verdict of people.

In 1977, the victory registered by him from Hajipur Lok Sabha constituency with a margin of 4,24,000 votes was historic. At that time it was the maximum margin by any politician in the world. It remained unchallenged for a long time.

In governance, he played a significant role to change the perception of people. The turnaround of P&T to BSNL and the latest one weeding out crores of bogus ration cards across the country are remarkable reforms under his guidance. He almost completed the mission of One Nation, One Ration card.