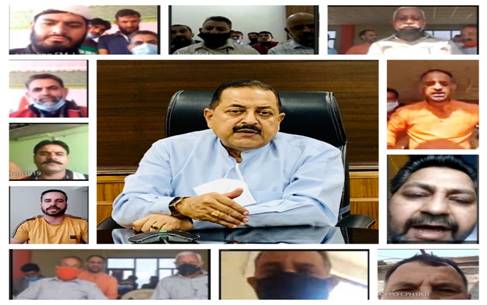 During an interaction with farmers, Sarpanches, and local activists from districts Doda and Kisthwar, Dr. Jitendra Singh said, the new farm reforms have a huge futuristic vision and are aimed at enabling young educated farmer of today to exercise his options in promoting his entrepreneurship and putting his technical knowledge to the best utility.

He said, as the benefits of the new reforms begin to be realised with each passing day, several youths from non-agricultural families will also start looking for a career as Start-Ups in the field of agriculture. Even if the earlier arrangement of crops being sold through APMC Centres held some relevance about 50 years ago, said Dr. Jitendra Singh, now the time has changed, the markets have opened up and the accessibility has become easier. Today’s youth is well connected, well informed and has the capacity to reach out and therefore, the new reforms are in keeping with the requirements of contemporary times.

All the young farmers and the local Panchayat representatives who participated in the interaction were unanimous in saying in one voice that they welcomed the new Legislations brought by the Modi government. They also alleged that the protests against the Legislations were being stage-managed and sponsored by the middlemen who feel that their vested interests will not be served in the times to come.

The local activists who participated in the programme said that they will reach out to each and every farmer to defeat the sinister design by the vested elements to mislead the farmers.

2020-10-09
Editor in chief
Previous: Odisha’s first STATE AIRCRAFT for V.I.P flying was gifted by Maharaja of Mayurbhanj Pratap Chandra Bhanjadeo for a token amount of One rupee
Next: No democracy in Odisha and the Cabinet ministers could not meet CM Naveen Patnaik:Chella Kumar