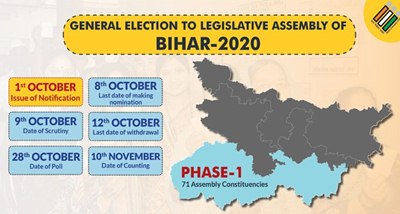 in National October 8, 2020 Comments Off on Filing of nominations for 1st phase of Bihar Assembly elections closes today 231 Views

Patna: 8/10/20: With only a few hours left in closing of nominations, political activities have intensified. Large number of candidates including contestants of major political parties and their supporters have gathered at the office of their respective Returning Officers (RO) in 71 assembly constituencies.

The scrutiny of nominations will take place tomorrow and the last date of withdrawal of candidature is 12th of this month. The polling will be held on 28th of October.

As per the report senior BJP leader and Agriculture minister Prem Kumar, state ministers Jai Kumar Singh, Ram Narayan Mandal, and former chief minister Jitan Ram Manjhi are among prominent candidates who have filed their nomination for the first phase.

In the first several sitting MLAs, former MLAs have been denied tickets due to the new political equation and seat-sharing deal. Due to this large number of rebel candidates have joined other parties or filing their nomination independently.

Dissident leaders like Rameshwar Chaurasia, Sunil Pandey, Usha Vidyarthi Shri Bhagwan Singh Kushwaha, and some others have filed their nomination against their authorized party candidates.

In another political development, JD(U) has decided to field the son of late Baidyanath Mahto in Valmiki Nagar Lok Sabha bye poll. Sunil Kumar will be the candidate of the party.