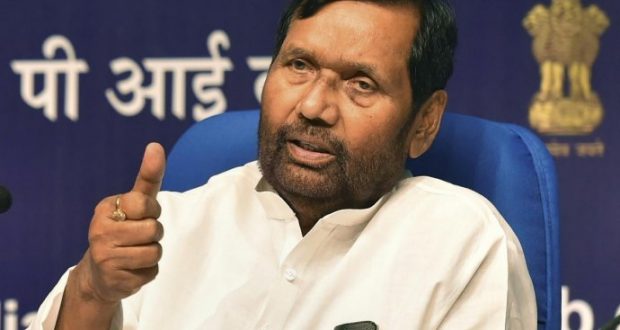 New Delhi: 8/10/20: Union minister Ram Vilas Paswan, one of the most prominent Dalit leaders of the country, died on Thursday at the age of 74, his son Chirag Paswan said.

.A stalwart of the socialist movement who later emerged as Bihar’s foremost Dalit leader with following across the country, Ram Vilas Paswan was instrumental in the implementation of the Mandal Commission report in the 1990s. Condoling his demise, President Ram Nath Kovind said, “In the demise of Union Minister Ram Vilas Paswan, the nation has lost a visionary leader. He was among the most active and longest-serving members of parliament. He was the voice of the oppressed, and championed the cause of the marginalized.” Expressing grief at Paswan’s demise, Prime Minister Narendra Modi said he was saddened beyond words as his death has le a void in the nation that will perhaps never be filled. “Shri Ram Vilas Paswan Ji’s demise is a personal loss. I have lost a friend, valued colleague, and someone who was extremely passionate to ensure every poor person leads a life of dignity,” Modi said in his condolence message. The prime minister also said Paswan “rose in politics through hard work and determination. As a young leader, he resisted tyranny and the assault on our democracy during the Emergency. He was an outstanding Parliamentarian and Minister, making lasting contributions in several policy areas.”

Born in Khagaria in 1946, Paswan was selected as a police official but chose the calling of politics and became an MLA for the first time in 1969 on a Samyukta Socialist Party ticket. He was elected to Lok Sabha eight times and also held the record of winning his constituency, Hajipur, with the highest margin for several years. Always at the forefront of raising issues concerning the disadvantaged sections of society, he was also a skillful grassroots politician who enjoyed good equations with leaders across the spectrum, and his dedicated following in his state ensured that every national party courted him in his over five decades of career. He was a minister in central governments headed by parties of contrasting ideological persuasions, ranging from the Janata Dal to the Congress and the BJP, since 1989. Whoever might be his ally, he took pride in describing himself as a socialist and secular politician by conviction.

2020-10-08
Editor in chief
Previous: Around 4000 Students will be benefitted with these newly developed campuses in the states of Odisha, Rajasthan and Haryana – Education Minister
Next: Osisha CM Naveen Patnaik inaugurated 12 industrial projects across the state worth ₹8796.61 Cr