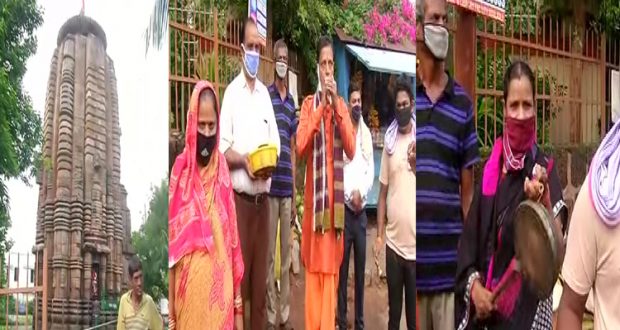 Bhubaneswar:7/10/20: In a unique protest, servitors and many devotees across the State beat gongs, rang bells, and blew conchs on Wednesday urging the Odisha government to reopen the temple with COVID-19 restrictions in place.

The protest, which was called by Odisha Mandira Sebayat Sangha (OMSS), witnessed participation of servitors and devotees at major religious places in Odisha.

During the protest, which began at 9 am and lasted for nine minutes, the servitors demanded that the temples should open soon as their livelihood is at stake. Moreover, they also demanded that the government should provide them compensation for their financial losses.

“The livelihoods of all the servitors have been jeopardized as the temples across the State have been shut down due to lockdown restrictions in the wake of the Covid-19 pandemic. Our family is suffering to make both the ends meet as we have no alternative means of earning. We have requested the government about our plight several times but of no avail. That is why we have staged this novel protest to draw the attention of the Government towards our plight,” said an OMSS senior member, who was protesting in front of Nageswar temple in Bhubaneswar.

“We had also requested the government to allow the temples to open from October 1st onwards, which fell in deaf ears. So we have decided to protest against the lackadaisical attitude of the Government,” he added. Many devotees and small vendors also joined with the servitors in the protest.

2020-10-07
Editor in chief
Previous: Odia film industry lost one of its popular and finest music arrangers, Tarakant Panda
Next: All government employees in Odisha will get their final payments of GPF in the month of their retirements