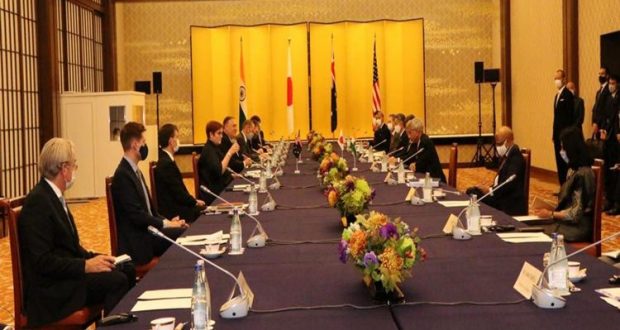 New Delhi:7/10/20: External Affairs Minister Dr. S. Jaishankar asserted that as vibrant and pluralistic democracies with shared values, the four QUAD member nations have collectively affirmed the importance of maintaining a free, open, and inclusive Indo-Pacific. Dr. S. Jaishankar in his opening remarks at the 2nd QUAD Ministerial Meeting in Tokyo, Japan yesterday said that the member countries remain committed to upholding the rules-based international order, transparency, freedom of navigation in the international seas, respect for territorial integrity, and sovereignty and peaceful resolution of disputes in the region.

He said, the objective of the QUAD member countries which include India, the United States, Japan, and Australia, remains to advance the security and the economic interests of all countries having legitimate and vital interests.

He also expressed satisfaction that the Indo-Pacific concept has gained increasingly wider acceptance. Dr. Jaishankar asserted that the meeting of four foreign ministers in person despite the global pandemic is a testimony to the importance that the QUAD Consultations have gained in recent times. He said the Covid-19 pandemic has brought about a profound transformation globally since the last meeting of the members last year.

Dr. Jaishankar said the events of this year have clearly demonstrated the imperative need for like-minded countries to coordinate responses to the various challenges due to the pandemic. The External Affairs Minister said that India looks forward towards seeking collective solutions to global challenges including global recovery from the pandemic and reform of multilateral institutions. The foreign ministers are holding a discussion on important issues such as connectivity and infrastructure development, security including counter-terrorism; cyber and maritime security; and the stability and prosperity in the region.

Dr. Jaishankar is on a two-day visit to Tokyo which began yesterday. Earlier in the day, he met Secretary of State of the United States Mike Pompeo ahead of his joint meeting with the foreign ministers of the QUAD countries. Dr. Jaishankar in a tweet said that he is pleased to see the progress of the Indo-US partnership in many fields. He said both the countries will work together for stability and prosperity in the Indo-Pacific.

A group of four nations which was conceptualized in 2007 for Quadrilateral security dialogues, better known as QUAD, received a fresh impetus in 2017 when Prime Minister Narendra Modi, American President Donald Trump and their Australian and Japanese counterpart rejoined on the sidelines of the ASEAN summit.

The member countries’ primary aim is to uphold democratic values and maintain a free, open and inclusive Indo-Pacific. The meeting of foreign Ministers of India, the United States, Australia, and Japan holds high significance amid the global pandemic. This is the second time the four foreign ministers met after their first meeting last year on the sidelines of the United Nations meet. The crucial meet will also embolden one of the most powerful and decisive unions of nations in the recent times.

Quad countries including Australia and Japan have already assured huge investments in India’s infrastructure, technology and supply chain. With the United States also hailing India as a big power in the Indo-Pacific region, the QUAD appears to have a pivotal role in reshaping the power dynamics of the world in the coming years.

2020-10-07
Editor in chief
Previous: New farm laws safeguard farmers from fluctuations of prices for their products
Next: Centre releases SOPs to contain spread of COVID-19 for upcoming festival season