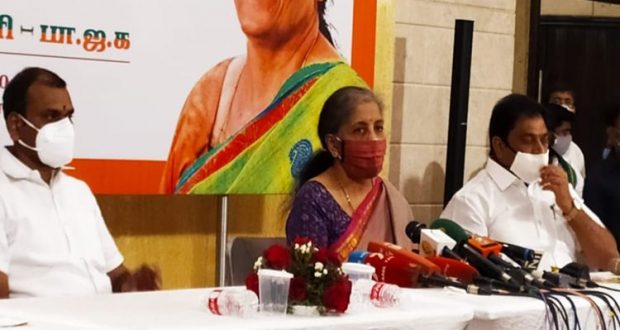 in National October 7, 2020 Comments Off on New farm laws safeguard farmers from fluctuations of prices for their products 259 Views

New Delhi:7/10/20: Union Finance Minister Nirmala Sitharaman has said the three new agricultural legislation brought by the centre would free the farmers from the shackles in marketing their products. Talking to reporters in Chennai last evening, she said comprehensive discussions were held with agricultural experts, farmers and various other stakeholders before bringing the legislation. She said the MSP mechanism will continue even while offering the farmers the option to sell their products to the traders of their choice, in their own time, wherever in the country’s Sitharaman said the doubts about the buyers of the agricultural products through the contract farming mechanism having any say on the landholding of the farmers is totally unfounded. She stressed that the farmers will be safeguarded from the fluctuations of the prices for their products using the three new legislations.

The Minister said various opposition parties incorporated the provisions of the new legislation in their election manifesto, though they are opposing them now with political intentions.

Ms Nirmala Sitharaman explained that in the MSP mechanism, 22 to 23 agricultural products were included but the MSP was regularly being announced only for products like wheat and paddy, leading the farmers to migrate from other essential products like oilseeds and pulses to wheat and paddy. She said it has led to the large-scale import of oilseeds and added that the situation will be altered now.

The Minister said the traders can stock sufficient quantities of agricultural products for processing them so that value addition can be made in a seamless way. She said it will prevent the wastage of perishable materials, thereby saving a huge sum of money for the farmers and the nation.

Ms.Nirmala Sitharaman said if any dispute arises between the buyer and the farmer in the contract farming method, it can be solved using the dispute redressal mechanism, that will function under the district collectors concerned.

Meanwhile, Nirmala Sitharaman interacted with a group of farmers in Chennai last evening. She told them that the three legislations on agriculture are in their best interests.

The Minister said those who say that they would tear away the legislations only undermine parliamentary democracy as they were passed by the Parliament.