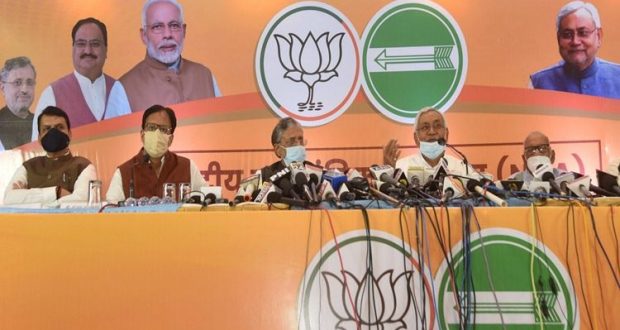 Patna:7/10/20; In Bihar, BJP has released a list of  27 candidates for the first phase of the state assembly election.
Among prominent candidates, cabinet ministers Prem Kumar is contesting from Gaya Town assembly constituency and Ram Narayan Mandal from Banka. Cabinet minister Vijay Kumar Sinha will contest from Lakhisarai and Brij Kishore Bind will be the candidate for Chainpur. Newly inducted shooting champion Shreyashi Singh will contest from Jamui assembly constituency.

Both BJP  and JD(U) released a list of assembly constituencies of their quota. According to the seat-sharing formula, BJP will contest on 121 seats and JD(U) on 122.

Out of this JD(U) has given 07 seats to its partner Hindustani Awam Morcha (HAM). The President of HAM party and former chief minister will contest from Imamganj assembly constituency.

JD(U), RJD, and Congress have not released the list of their party candidates. Tomorrow is the last date of filing of nomination papers for the first phase of elections. Polling will be held on 28th October in 71 assembly constituencies spread over 16 districts.

2020-10-07
Editor in chief
Previous: Odia actor Santosh Nayak passed away
Next: New farm laws safeguard farmers from fluctuations of prices for their products