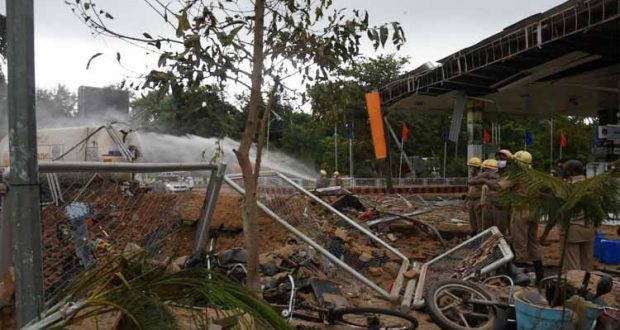 Bhubaneswar:7/10/20: The explosion at a petrol pump that ripped through the Raj Bhawan area in Bhubaneswar today morning left nine persons injured among whom two persons have been admitted to SCB Hospital in Cuttack in critical condition.

Bibhuti Nayak of Cuttack SCB Plastic Surgery department said, “While one has sustained 60% burns, the other has suffered 40%. Both have sustained grievous head injuries and experts from multiple departments are engaged in their treatment.”

The explosion was so severe that many vehicles including bikes and four-wheelers had been blown away under its impact and according to the eye-witnesses and passersby; the blast sent earthquake-like tremors through the vicinity.

Union Petroleum Minister Dharmendra Pradhan has ordered a probe into the fire mishap triggered by an explosion at a filling station near Raj Bhawan in Bhubaneswar on Wednesday.

Taking to Twitter, Pradhan said, “After learning about the mishap, I have directed the secretary of the petroleum and natural gas department to inquire into it.”The Union Minister also held a discussion with senior officials of the Odisha government and Indian Oil Corporation Ltd. and instructed them to submit the probe report at the earliest.