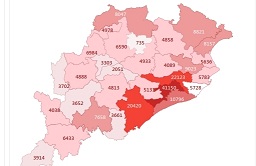 Bhubaneswar6/10/20:: Odisha has witnessed 2673 fresh coronavirus cases in the last 24 hours, taking the total virus tally in the State to 238003. The State also reported 16 fatalities during the period, which has pushed the death toll to 940.

Of the fresh cases, 1554 have been detected from quarantines while 1119 are local contact cases. Khordha district has reported the highest 448 cases followed by Cuttack with 214 positives, Nuapada (159), Kendrapara (151). During the last 24 hours, four COVID-19 deaths were reported from Balasore district, three deaths from Khordha district, while two persons succumbed in Cuttack. Angul, Nayagarh, Mayurbhanj, Nabarangpur, Subarnapur, Puri, and Boudh districts reported one death each.

As per official reports, 41840 samples were tested on Friday for COVID-19 that include 6185 RT-PCR, 35550 samples via Antigen testing, and 105 samples via Truenat testing, taking the number of samples tested cumulatively across the state to 3524242.

The total number of patients in Odisha who have recuperated so far stands at 210217, while active case count is 26793