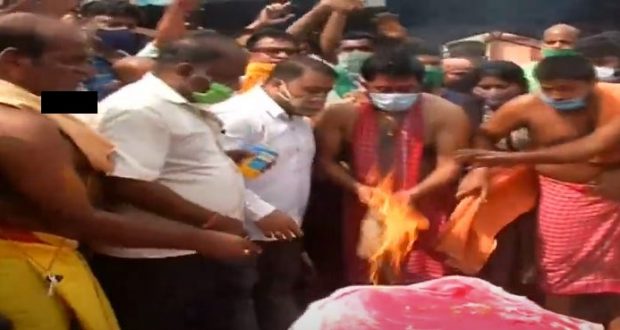 Pradeep Maharathy mortal remains were consigned to flames at Swargadwara

in State News October 4, 2020 Comments Off on Pradeep Maharathy mortal remains were consigned to flames at Swargadwara 573 Views

Puri:4/10/20: Kin and admirers of late Pipili MLA and BJD leader Pradeep Maharathy bid a tearful adieu to him as his mortal remains were consigned to flames at Swargadwara in Odisha’s Puri today.

The veteran leader was also accorded guard of honour before his son lit the funeral pyre. Hundreds of supporters of Maharathy gathered at Swargadwara to have a last glimpse of the departed soul. The mortal remains were cremated with full state honours.

Earlier in the day, the body was taken from his residence in Bhubaneswar to the Odisha Legislative Assembly premises, then to the BJD state headquarters, and later to his farmhouse in Pipili.

As the hearse carrying the body headed towards Pipili from Bhubaneswar, the stretch of the road reverberated with ‘Pradeep Maharathy Amar Rahe’ slogans.

Thousands of constituents of Pipili gathered on roadside while many of them followed the hearse on motorcycles paying last respects to the departed leader as the vehicle carrying their deceased elected representative moved towards Swargadwara.

Maharathy breathed his last while undergoing treatment at a private hospital in Bhubaneswar late last night. He was admitted to the hospital after he tested positive for COVID-19 on September 14.

2020-10-04
Editor in chief
Previous: Around 40 to 50 crore doses of COVID-19 vaccine expected to be ready by July 2021
Next: Odisha government transferred Jagatsinghpur Collector and District Magistrate