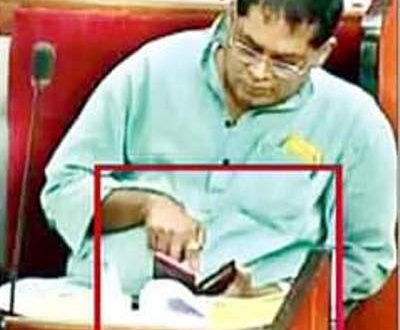 in State News September 30, 2020 Comments Off on Odisha Health Minister dismissed all the allegations on COVID-19 mismanagement leveled by the Opposition 571 Views

Bhubaneswar:30/9/20 Odisha Health Minister Naba Das on Wednesday dismissed all the allegations on COVID-19 mismanagement leveled by the Opposition political parties against the government.

Making a statement during the Monsoon Session of the State Legislative Assembly after an adjournment motion was moved in connection over the matter, Das defended his government’s efforts in tackling the pandemic.

The minister argued that Odisha has been doing a lot better in terms of COVID management than other states of India. To reinforce his point, he pitted that while the national mortality rate in the viral disease is at 1.6%, Odisha’s rate is as low as 0.38%”, said Das.

Bringing in some more data, Das said, “Odisha now has active cases just over 36,000. Out of this 29,000 positive patients are currently in-home quarantine, while just 7348 patients are being treated in COVID hospitals.”

Questioning the opposition’s tirade, Das said, “If the government has failed in COVID management, then how these patients are recovering from the serious disease that has claimed more than 800 lives and infected over 2 lakh people in the State.

Das spoke regarding the migrant issue as well. As per his statement in the Assembly, “COVID 19 was under control in the state during the lockdown. However, the situation deteriorated after migrants returned to Odisha.”

“Alleged COVID kit procurement scam is under investigation and the perpetrators will be punished according to the law if found guilty,” he noted.

However, both Congress and the BJP did not seem to be satisfied with the Health minister’s statements.

2020-09-30
Editor in chief
Previous: Odisha High Court deferred the hearing of the petition on restricting the height of idols till October 9.
Next: From Governance To Community Resilience, Odisha’s Response To COVID-19 Impressive: WHO