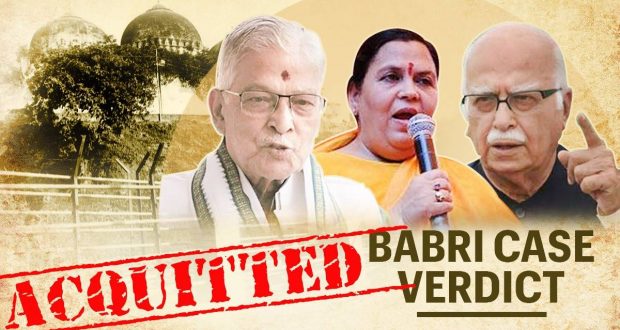 Lucknow :30/9/20: Special CBI Court in Lucknow today acquitted all 32 accused in the Babri demolition case. Special CBI Judge Surendra Kumar Yadav said that demolition happened at the spur of the moment and it was not a pre-planned incident. He said that there was not enough evidence to prove the allegations made by CBI in this case.

While delivering his verdict, the Special Judge said that the demolition was done by some anti-social elements and there was no alliance between such persons and the accused.

Most of the senior leaders among the 32 accused such as L.K. Advani, Kalyan Singh, and Murli Manohar Joshi were not present in the Lucknow court due to various reasons.  Senior BJP Leader L K Advani welcomed the verdict.

Defence Minister Rajnath Singh has also welcomed the verdict of CBI Special Court in Lucknow acquitting all accused in the Babri Masjid demolition case. In a tweet, Mr. Singh said, the decision has proved that justice can never be denied.

2020-09-30
Editor in chief
Previous: Bye-elections in Odisha will be held on 3rd November,2020
Next: India, China decide to implement five point agreement to ensure disengagement at all friction points along LAC