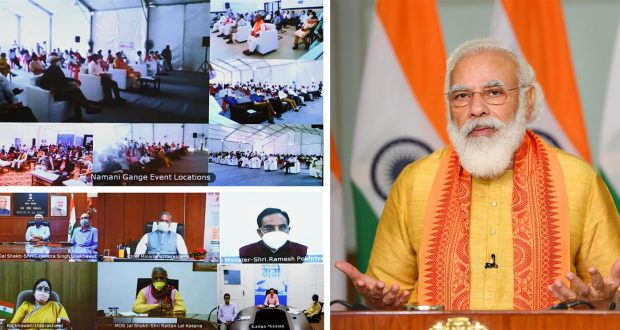 Shri Modi also inaugurated the Ganga Avalokan Museum, the first of its kind on the River Ganga at Haridwar. He released a book “Rowing Down the Ganges” and the new logo for the Jal Jeevan Mission. The Prime Minister also unveiled the ‘Margadarshika for Gram Panchayats and Paani Samitis under Jal Jeevan Mission’ (Guidelines for the Village Panchayats and Water Committees) on the occasion.

Speaking on the occasion the Prime Minister said the Jal Jeevan Mission aims at providing every rural household in the country with piped-water connection. Shri Modi said that the new logo of the Mission shall continue to inspire the need to save every drop of water.

Referring to the Margadarshika, the Prime Minister said that they are equally important for the Gram Panchayats, people living in rural areas as well as for the Government machinery.

Describing the book “Rowing Down the Ganges” he said it explains in details how the River Ganges stands as a glowing symbol of our Culture, Faith and Heritage.

Shri Modi highlighted the importance of keeping the River Ganga clean as it plays a significant role in sustaining the lives of about 50 percent of the country’s population from its origin in Uttarakhand till West Bengal.

He termed the Namami Gange Mission as the largest integrated river conservation mission which not only aims at the cleanliness of River Ganga but also focuses on comprehensive upkeep of the River. Prime Minister said this new thinking and approach had made the River Ganga return back to life. Had the old methods been adopted, the situation would have been equally bad today. Old methods lacked public participation and foresight.

Shri Modi said the Ministry of Jal Shakti was formed to bring in a synergy and give impetus to dealing with these challenges.  He said the ministry is now engaged in the mission of ensuring access to piped drinking water to every house in the country.

Today, about 1 lakh households are being provided piped water supply connections every day under the Jal Jeevan Mission. He said drinking water connections have been provided to 2 crore families of the country in just 1 year.

He lauded the Government of Uttarakhand for providing drinking water connections to more than 50 thousand families even during the period of Corona in the last 4-5 months.

He said these are the very same people who criticised the surgical strike and asked the soldiers to prove that there was a surgical strike. Shri Modi said this makes clear to the whole country what their actual intentions are.

He added with passage of time these people who oppose and protest are becoming irrelevant.

2020-09-29
Editor in chief
Previous: Shekhar Kapur has been appointed President of the Film and Television Institute of India
Next: Bye-elections in Odisha will be held on 3rd November,2020