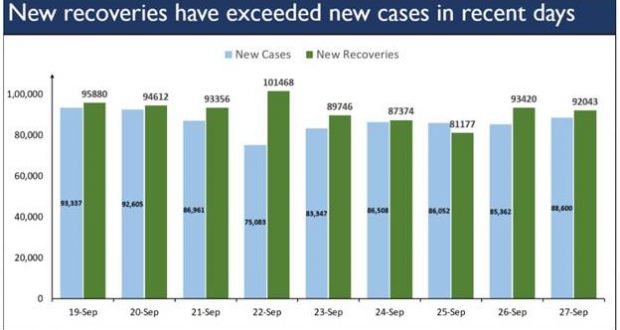 Newdelhi:27/9/20: New recoveries in India have exceeded the new cases for several successive days during the period of the past nine days. There has been a steep increase in the number of recovered patients. The single-day recoveries on an average have been more than 90,000.

92,043 recoveries have been registered in the last 24 hours in the country, while the number of new confirmed cases stands at 88,600. With this, the total number of recoveries are close to 50 lakhs (49,41,627). Maintaining its upward trend, the national Recovery Rate presently stands at 82.46%

This high rate of daily recoveries has sustained India’s leading global position as the country with the maximum number of recovered cases.

As India records more recoveries than the new cases, the gap between the percentage recovered cases and the percentage of active cases are continuously increasing. The number of active patients has been below 10 lakh for several successive days. The active caseload is merely 15.96% of the total positive cases and is consistently declining. 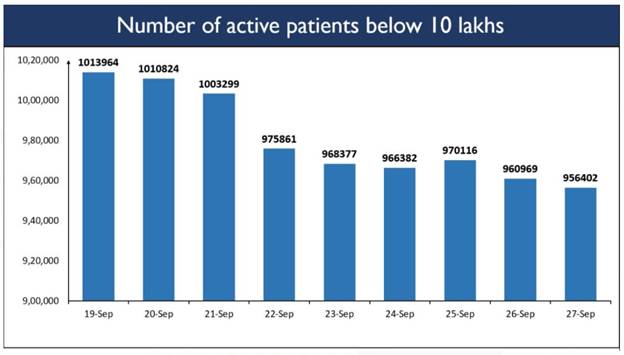 Close, proactive, calibrated, and effective coordination between the Centre and States/UT governments have made this sustained high level of single-day recoveries possible.

21 States/UTs have reported higher number of new recoveries than the new cases. These results have been ensured through sustained, multi-pronged strategies and effective actions, coupled with regular review by the Union Government. Early identification through high countrywide testing, prompt surveillance & tracking supplemented with standardised clinical care have aided these encouraging outcomes.