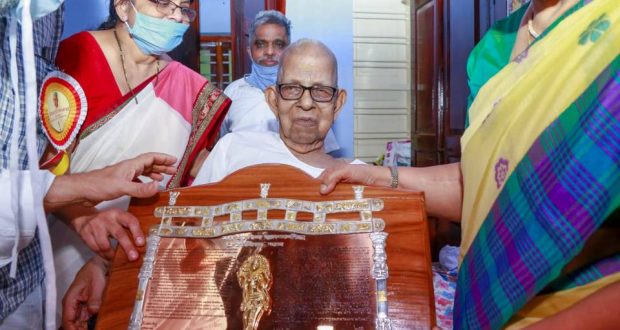 Palakkad:25/9/20: Renowned Malayalam poet Akkitham Achuthan Namboothiri was conferred the Jnanpith award, the country’s highest literary award, on Thursday at a special function held at his house at Kumaranallur, near Palakkad. State cultural minister AK Balan handed over the award to the poet. Chief Minister Pinarayi Vijayan, who inaugurated the function through video conference, said Akkitham’s outlook towards life and the universe itself is shaped by harsh realities. Mr. Vijayan said the poet’s writings have turned out to be proverbs in the Malayalam language.

Jnanpith laureate and Chairperson, Jnanpith Selection Board, Dr.Pratibha Ray in her address highlighted his seminal works and emphasized the meaningful modernism in his creations. Pratibha delivered her address in the online mode. It was a rare award ceremony of Jnanpith, the first-ever virtual ceremony for awarding the 94-year-old Akkitham. 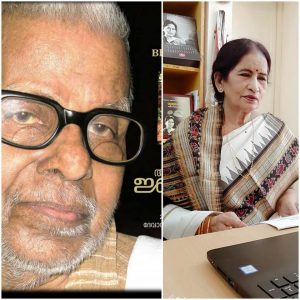 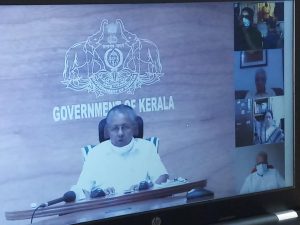 (Photo credit: Adysha Das Face book page)
Akkitham is the sixth writer to bag the Jnanpith Award for Malayalam literature. The award was announced in November last year but the handing over ceremony was delayed due to COVID-19 lockdown. first Jnanpith was awarded to Keralite poet G Sankara Kurup in 1965, then in 1980 it was awarded to writer S K Pottekkatt, Thakazhi Sivasankara Pillai in 1984, M T Vasudevan Nair in 1995, and O N V Kurup in 2007.Akkitham is the only living poet being called Mahakavi (great poet) in Malayalam. The 93-year-old poet is instrumental in heralding modernism in Malayalam poetry. A true Gandhian, social reformer, journalist, and an iconic example of simplicity, Akkitham has been a man who wears many hats with aplomb beside his gifted literary life. Born in a traditional Namboothiri (Brahmin) family in Kumaranallur in Palakkad district, Akkitham had trumpeted his arrival to Malayalam literature at the age of eight by penning his first poem. He later gained recognition as a poet, essayist, and editor in his decades-long life besides taking part in social reform and renaissance movements.  A jury under the chairmanship of noted Odia writer Pratibha Rai held a meeting before the declaration of his name. The jury’s other members were Shamim Hanafi, Suranjan Das, Madhav Kaushik, and Dr. Purushottam Bilimalale. The award consists of Rs 11 lakh, a statue of Vagdevi, a citation, and a memento.

Akkitham is a famous writer in the Malayalam poetry world. He was born in 1926 and his full name is Akkitham Achuthan Namboodri but he is popularly known as Akkitham. He was interested in literature and art since childhood. Apart from poetry, Akkitham has also written plays and novels. His most of the poetry works have a unique prophetic character. He predicts a range of socio-political developments in his poetry. Akkitham is famous for showing modernity through his poetry.

• Akkitham’s poems combine Indian philosophical and social values which are like a bridge between modernity and tradition.
• He has written 55 books so far and 45 are poetry collections among them.
• He has translated works of other Indian languages. His one of the most famous Poetry book is Irupdam Nootandidae Itihasam is quite popular among his readers.
• Some of his famous books are – “Khand Kavya”, “Katha Kavya”, “Charitra Kavya” and lyrics.
• Some of his famous works include “Veeravadam”, “Balidarshanam”, “Nimisha Kshetram”, “Amrita Khatika”, “Akkhitam Kavitakhaka”, “Epic of Twentieth Century” and “Antimkalam”.
• Akkitham has conferred with the Padma Shri. He has also been honoured with the Sahitya Akademi Award in 1973, the Kerala Sahitya Akademi Award in 1972, and the Kerala Sahitya Academy Award in 1988, and the Kabir Samman.

• The Jnanpith Award is the highest literary award given by the Indian Jnanpith Trust for Indian literature.
• Any citizen of India who writes in any of the 22 languages mentioned in the Eighth Schedule is eligible for this award.
• An award of eleven lakh rupees, a citation and a bronze statue of Vagdevi are given in the award.
• This award, which started in 1965 with prize money of Rs 1 lakh, has been increased to Rs 7 lakh in 2005, which have now been eleven lakh rupees.
• Hindi litterateur Kunwar Narayan, elected for 2005, was the first person to receive the Jnanpith Award of Rs 7 lakh.
• The first Jnanpith Award was presented to Malayalam writer G. Shankar Kurup in 1965. 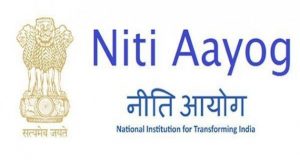 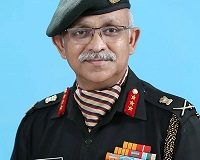 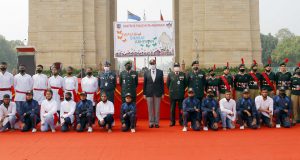 Bhubaneswar:19/1/21: Ollywood superstar Siddhanta Mahapatra loves to experiment and this time, he has done so by acting in an Odia TV serial titled ‘Kemiti Kahibi Kaha’.While the Odia entertainment industry ...