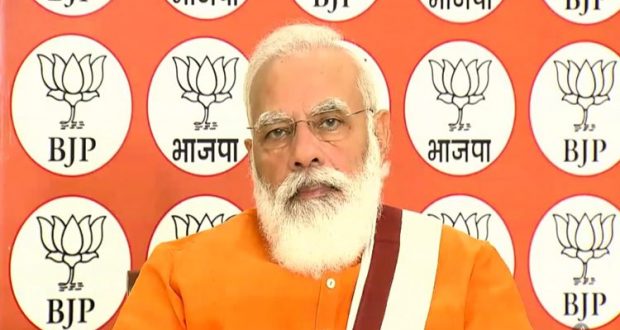 Newdelhi:25/9/20: Prime Minister Narendra Modi said that the farm bills and labour laws recently passed by the parliament will free the farmers and workers in the country from the cobweb of unnecessary laws.

Addressing BJP party workers on the occasion of the birth anniversary of Pandit Deendayal Upadhyay, he took a sharp dig at the opposition parties and said that they are misleading the people of the country by spreading blatant lies.

The Prime Minister lauded the farm bills and labour reforms introduced by the government and said that since independence the parties in power only tried to reap political gains from the workers and farmers by making false promises.

Mr Modi stressed that the much-awaited freedom in the agriculture sector will be achieved by the new farm bills. He said farmers will be able to sell their products anywhere in the country in addition to the existing Mandis. He said, 85 out of 100 farmers will be benefitted by the new legislation and urged BJP workers to reach out to the farmers in the country and explain to them about the benefits of the new provisions. The Prime Minister underlined the historic reforms which the government has brought to make the agrarian economy strong. Mentioning the hike in MSP by 1.5 times and manifold increase in government procurement of Agri produce, Prime Minister informed that the government implemented the long due reforms in the sector.

Prime Minister said that even during COVID pandemic party workers are working without fading efforts to help those affected.

2020-09-25
Editor in chief
Previous: 670 new electric buses and 241 charging stations sanctioned under FAME scheme
Next: Central government has suspended the operation of the Insolvency and Bankruptcy Code by another three months