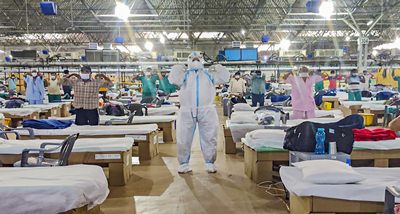 Newdelhi:25/9/20: The nation achieved another milestone in COVID testing by conducting nearly 15 lakh tests in the last 24 hours. With a cumulative testing figure of around 6 crore 89 lakh 28 thousand 440, India continues to be one of the countries across the world conducting the highest number of daily tests.

Starting from just one testing lab at the National Institute of Virology, Pune in January this year, the country today has one thousand 818 labs for testing COVID samples which includes one thousand 84 government and 734 private labs.

Despite an increase in testing the positivity rate remains low and currently hovers around 8.5 percent. Bihar, Gujarat, Uttar Pradesh, Manipur, Jharkhand, and Telangana are among the states recording a positivity rate even lower than 5 percent.

The country is registering a continuous increase in the number of patients who recovered from COVID-19. With the recovery of over 81 thousand people in the last 24 hours, the total recovery tally has crossed over 47 lakh 56 thousand. The overall recovery rate has now reached  81.74 percent.

The Health Ministry has said that the gap between recovered cases and active cases is progressively growing wide. The actual caseload of the country currently comprises only 16.67 percent of the total positive cases. The number of recovered patients has overtaken active cases by nearly 5 times. The unprecedented surge in COVID recoveries with more than 100 percent increase in patients recovered and discharged in the last one month has also been reported.

The Health Ministry has informed that the sustained high recovery rate is fuelled by 9 states and Union Territories reporting recovery rate of over 80 percent. These states include Bihar, Tamil Nadu, West Bengal, Rajasthan, and Gujarat among others.

The ministry has informed that aggressive measures for early identification, prompt and effective treatment, and enhanced clinical skills of ICU doctors have led to the progressive enhancement of  India’s total recoveries.

Early identification through wide-scale testing, prompt and effective treatment in hospitals, and supervised home as well as facility isolations, have actively led to a high recovery rate in the country. Currently, India’s Case Fatality Rate stands at 1.59 percent. India has progressively maintained a low Case Fatality Rate compared to the global average.

In the last 24 hours, 86 thousand 52 new cases have been reported taking the total number of positive cases to 58 lakh 18 thousand 571.

Presently, the total number of active corona cases in the country is 9 lakh 70 thousand and 116. In the last 24 hours,  one thousand 141 deaths have  been reported taking the toll to 92 thousand 290.

2020-09-25
Editor in chief
Previous: Central government has suspended the operation of the Insolvency and Bankruptcy Code by another three months
Next: Odisha’s COVID-19 tally today breached 2 lakh-mark with 4208 fresh cases