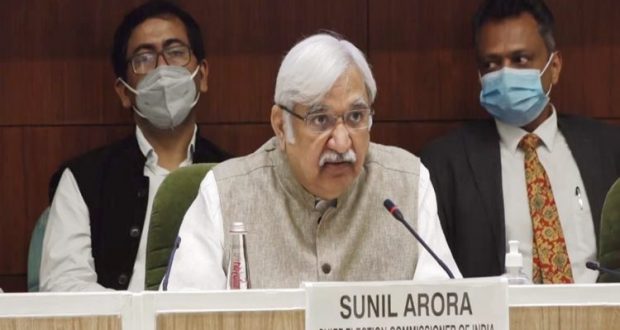 Newdelhi:25/9/20: The Assembly elections in Bihar will be held in three phases starting from the 28th of next month.  The counting will take place on 10th November.

Announcing the poll scheduled in New Delhi today, Chief Election Commissioner Sunil Arora said, the Model Code of Conduct, MCC has come into effect with the declaration of elections.  He said, 71 assembly constituencies will go to polls in the first phase on 28th October, 94 seats in the second phase on 3rd November, and 78 seats in the third phase on 7th November.

Mr. Arora said, the number of phases for 243-member Bihar assembly polls has been reduced keeping in mind security arrangements and festive season.  He informed that the voting time has been extended by one hour till 6 PM and COVID-19 patients will vote in the last hour of the day. He said the COVID-19 pandemic has forced a new normal in all aspects of life and Bihar assembly elections will be held under new security protocols.

The Chief Election Commissioner said, the number of polling booths has been increased to ensure social distancing and social distancing norms will have to be followed at public gatherings during the poll campaign. The number of people accompanying a candidate for submission of nomination has been restricted to two, while a door-to-door campaign can have a maximum of five people including the candidate.

The Election Commission has also created an optional facility to fill the nomination form and the affidavit online and submission of the same, after taking a print, before the Returning Officer concerned. For the first time, the candidates will have the option to deposit a security amount online for contesting the elections.

Mr. Arora informed that seven lakh hand sanitiser points, 46 lakh masks, 6 lakh PPE kits, 6.7 lakh face shields, 23 lakh pairs of hand gloves have been arranged in the wake of the COVID pandemic.  He added that social distancing norms will have to be followed at public gatherings and other activities during the election campaign.

He said the Election Commission has made elaborate arrangements for ensuring the effective implementation of MCC guidelines. The Chief Election Commissioner added that anyone who indulges in misuse of social media with respect to elections will have to face consequences under the law.

Election Commission has informed that it will decide on by-polls for 1 Lok Sabha and 64 Assembly Seats after a review meeting on 29th September on issues raised by some states on poll timing.