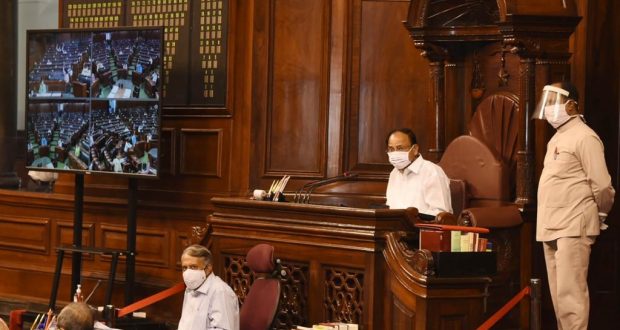 Rajya Sabha practices ahead of Monsoon Session from Monday.

New Delhi:23/9/20: The Rajya Sabha on Wednesday passed a Bill sans opposition making Aadhaar mandatory for registration of organisations receiving foreign funds, and also to give the government powers to stop utilisation of foreign funds by an organisation through a “summary enquiry”.

“The Bill ensures that the NGO has to open mandatory an account in the SBI FCRA branch to receive funds and then one more account to another bank of choice, for this they don’t have to travel to Delhi but the nearest SBI account will facilitate the opening of an account in New Delhi,” said Minister of State of Home Nityanand Rai.

There was a need to streamline the provisions of the earlier Act by strengthening the compliance mechanism, enhancing transparency and accountability in the receipt and utilisation of foreign contribution worth thousands of crores of rupees every year, and facilitating genuine non-governmental organisations or associations who are working for the welfare of the society.

He gave an example of the amendment made in 2010 when administrative expenses were reduced to 50 per cent, then also a demand was made to reduce it up to 10 percent. He said P. Chidambaram had then mentioned that 10,000 crore of the foreign contribution is not even audited.

Criminal investigations also had to be initiated against dozens of such non-governmental organisations which indulged in outright misappropriation or mis-utilization of foreign contribution, he said. Seeking to amend clause (c) of sub-section (1) of section 3 of the Act, the government has proposed to include “public servants” within its ambit, to provide that no foreign contribution shall be accepted by them.

Earlier, it was restricted to Legislators, election candidates, journalists, print and broadcast media, judges, government servants, or employees of any corporation or any other body controlled or owned by the government.