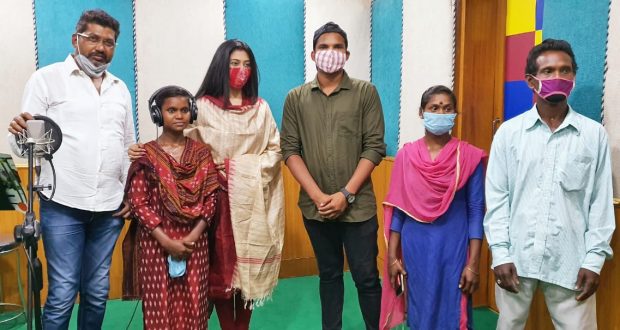 Cuttack:20/9/20: Dreams of Namita Meleka, a tribal girl from Chintaguda village of Koraput district, took shape today when she recorded her first song at a studio in Cuttack city. Namita, the latest internet sensation after a video of her singing Hindi song ‘Chunar’ from Bollywood movie ‘ABCD 2’ went viral on social media, recorded a devotional song of Lord Jagannath as her first song at New Recording Studio under the supervision of famous Music Director Prem Anand.

Namita lent her voice for the four-minute song ‘Ninuna, Jiuti Jeevan…’ written by Lyricist Bijaya Malla. She recorded the song in both Odia and Kui languages, informed Prem Anand.

Ollywood actress Varsha Priyadarshini, who assured Namita of help after coming across her ‘Chunar’ song on social media, was also present when the Koraput girl recorded her first song.

Sources said the devotional song sung by Namita will be released on the YouTube channel of Varsha Priyadarshini soon.

2020-09-20
Editor in chief
Previous: Simanchala Dash from Odisha has been appointed as the Advisor to Executive Director IMF
Next: COVID death toll in Odisha has reached 701 while the cumulative caseload jumped to 179880