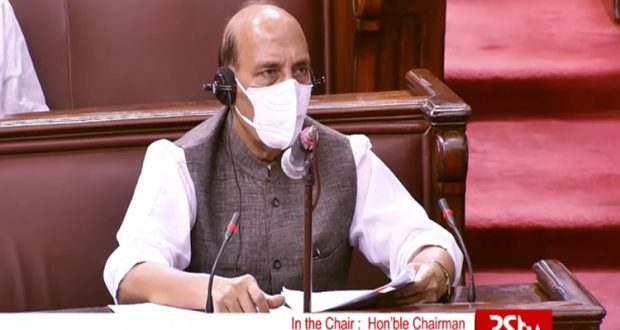 Newdelhi:Defence Minister Rajnath Singh today said that India is committed to resolve the current border issue with China through a fair and peaceful manner and at the same time the country is also prepared to deal with all contingencies. He said, China is trying to change the status quo at the Line of Actual Control which is unacceptable to India at any condition. The Defence Minister was making a statement in the Rajya Sabha on the development on border in Ladakh region.

Mr. Singh said, the current situation is very different both in terms of scale of troops involved and number of friction points. He said, conduct of Indian forces throughout the standoff shows that while they maintained patience in face of provocative actions, they also equally displayed valour when required to protect territorial integrity of the country.

The Defence Minister added that Chinese actions reflect a disregard to various bilateral agreements and amassing of the troops by China goes against the 1993 and 1996 agreements.

Mr Singh said, China, in the last many decades undertook significant infrastructure construction activity to enhance their deployment capabilities in the border areas.

The Minister added that Indian government has doubled the budget for border infrastructure development. He said, China continues to be in illegal occupation of around 38,000 square kilometres in Ladakh and Pakistan illegally ceded 5,180 square kilometres of Indian territory in Pakistan-occupied Kashmir to China. Mr. Singh said, border issues are a complex matter and both India-China have accepted that peace is essential for bilateral ties.

Later, leaders cutting across party lines spoke in one voice against the Chinese aggression and reiterated their commitment to support the government and armed forces. Leader of Opposition, Gulam Nabi Azad said, Congress is committed to protect the unity and integrity of the country. P. Wilson of DMK, Ravi Prakash Verma of Samajawadi Party also extended their support to the government. Sanjay Singh of Aam Adami Party, Prem Chand Gupta of RJD, Binoy Vishwam of CPI, Elamaram Karrem of CPI(M), Veer Singh of BSP and other also supported the government on this issue.

2020-09-17
Editor in chief
Previous: Centre issues advisory to all states / UTs and their real estate regulatory
Next: Sewa Saptah being organised across country to mark PM Modi’s birthday