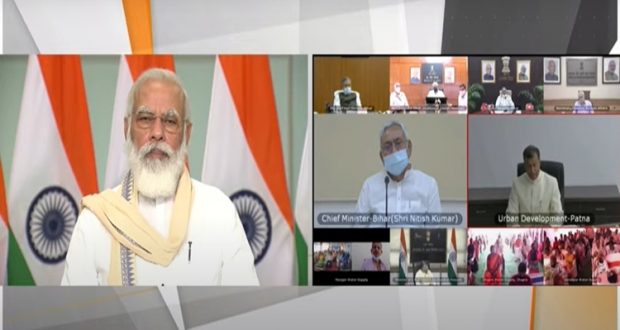 Newdelhi:15/9/20: Prime Minister Narendra Modi today inaugurated and laid the foundation stones for seven projects related to urban infrastructure in Bihar under ‘Namami Gange’ and ‘AMRUT’ schemes through video conferencing. Out of these, four projects are related to water supply, two to sewerage treatment, and one to riverfront development. The total cost of these projects is 541 crore rupees. The implementation of these projects has been undertaken by Bihar Urban Infrastructure Development Corporation Ltd (BUIDCO).

During his address, the Prime Minister said, the programme is taking place on the occasion of Engineer’s Day which marks the birth anniversary of the great engineer of the country M Vishvesvaraya. He asserted that engineers of the country have made an unprecedented contribution in building the nation as well as the world.

Mr. Modi said, more than 50 projects worth 6000 crore rupees have been approved in Bihar to keep river Ganga clean. He said several tourist spots are emerging along the bank of Ganga.

He expressed hope that the Namami Gange project will change the life pattern of the people. A Sewerage treatment plant has been set up to stop the flow of polluted water into the river Ganga. Villages on the banks of Ganga are being developed as Ganga Gram. The Prime Minister said that under the Namami Gange mission, development work on more than 180 ghats is going on in the country. He said Namami Gange will also be very helpful for Project Dolphin and biodiversity in Ganga.

The Prime Minister said, due to joint efforts of the Center and the  Bihar government, basic amenities like drinking water and sewer are constantly improving in the cities across the State.  In the last 4 to 5 years, lakhs of families have been connected to water facilities in the urban areas of Bihar under the schemes of Mission Amrut and State Government’s schemes.

The Prime Minister said, in the last one year, over two crore water connections have been given all over the country under the Jal Jeevan Mission. Mr. Modi said, today, more than one lakh households in the country are being connected to piped water.

The Prime Minister laid the foundation stone of Munger water supply scheme under AMRUT Mission which will help residents of Munger Municipal Corporation get pure water through pipelines. Foundation stone of Jamalpur water supply scheme under AMRUT Mission in Jamalpur Municipal Council was laid by the Prime Minister on this occasion.

The foundation stone of Muzaffarpur Riverfront Development Scheme, being built under Namami Gange, was also laid by the Prime Minister. Under the project, three ghats of Muzaffarpur, Poorvi Akhada Ghat, Seedhi Ghat, and Chandwara Ghat will be developed. Basic facilities like toilets, information kiosks, changing rooms, pathways, and watchtower will be made available at the riverfront. Proper security arrangements, signage, and adequate lighting will be arranged for at these Ghats.

Chief Minister Nitish Kumar was also present on the occasion. Addressing the gathering, the Chief Minister expressed gratitude to the Prime Minister for extending support to Bihar. Mr. Kumar assured that the state will take all steps to complete these central projects within the stipulated time. He said the water from the treatment plant will be used for irrigation purposes in the state.

Participating in the function, Union Minister Ravi Shankar said, digital infrastructure has been strengthened in Bihar and 8,743 panchayats have been connected through Bharatnet in the State.