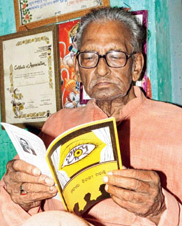 Cuttack: 14/9/20:   Nadia Bihari Mohanty of AIR Cuttack left his heavenly abode on 14.09.2020(Monday) at his Telenga Bazar, Cuttack residence in 90 years.his audio partner popularly known as APA, of Sishu Sansar programme (AIR) Binapani Mohanty, left early. Most of ODIA cinema celebrity such as Prasanta Nanda or  Swaroop Naik( music director) have come close contact with Appa & Bada Bhai during childhood. Family members said Nadia Bihari was undergoing treatment at the private hospital for the past few days. He had also tested positive for COVID-19. He is survived by wife Arati.

Mohanty had joined as a programmer at All India Radio, (AIR) Cuttack, in the 1960”s. He soon became a household name for his popular children’s programme ”Sishu Sansar”.

The author, who made notable contributions to children’s literature, was better known as ”Bada Bhai” – the moniker he had used for his radio programme. He was awarded Kendriya Sahitya Akademi award in 2013.

Odisha Governor Ganeshi Lal, Chief Minister Naveen Patnaik, Union Petroleum and Steel Minister Dharmendra Pradhan and a host of dignitaries have mourned the demise of Mohanty, saying the legendary writer was a source of inspiration for the younger generation.

2020-09-15
Editor in chief
Previous: Harivansh re-elected RS deputy chairman
Next: Centre has sanctioned more than Rs 36 crore for conservation of tigers and elephants in Odisha