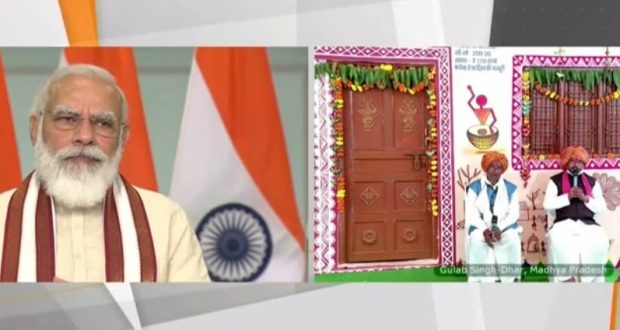 PM addresses the ‘Grih Pravesham’ event:Interacts with beneficiaries under PMAY-G

Shri Narendra Modi also interacted with the beneficiaries under PMAY-G in Madhya Pradesh.The Prime Minister said that the 1.75 Lakh beneficiary families who are moving into their new houses today have got their dream home and also a confidence about the future of their children. He said that the beneficiaries who got homes today have joined the ranks of the 2.25 crore families who have got their own house in the last 6 years and will now be living in their own house rather than living in a rented house or a slum or a kutcha house. He wished the beneficiaries Diwali and said that he would have been amongst them personally to share their joy if not for the Corona.

The Prime Minister said that notwithstanding the challenges during the Corona period, work of 18 lakh houses has been completed throughout the country under the Prime Minister Awas Yojana-Gramin and among that 1.75 lakh houses completed in Madhya Pradesh itself. He said that on an average, building a house under PMAY-G takes about 125 days but during this period of Corona, it was completed in just about 45 to 60 days which is a record in itself. He said this was made possible owing to the migrants returning from cities to their villages. The Prime Minister said this is a great example of turning a challenge into an opportunity.  He said that these migrant labour took care of their families by taking full advantage of the Prime Minister Garib Kalyan Rozgar Abhiyan and at the same time worked to build homes for their poor brethren.

He added that the poor are not only getting a house, they are also  getting toilets, Ujjwala Gas connection, Sowbaghya Yojana, Power connection, LED bulb and Water connection also along with it. He said that schemes like PM Awas Yojana, Swachh Bharat Abhiyan are playing an important role in changing the lives of rural sisters. Prime Minister said about 27 welfare schemes of the Central Government are linked to the PM Awas Yojana.