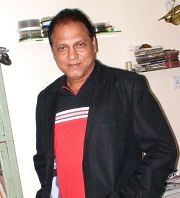 Bhubaneswar:9/9/20:  Veteran  Odia cinematographer Gagarin Mishra passed away while undergoing treatment at a private hospital in Mumbai. He was 67. Sources said Mishra was admitted to the hospital following a cardiac arrest.DOP Gagarin Mishra had returned from Odisha yesterday after attending his elder brother’s Deven Mishra funeral.

The cinematographer has several Odia movies to his credit,  including Phula Chandana and Nai Separi Kanaka Gori. Besides, he has also worked in many Bollywood films like Betaab, Akayla, Tezaab, Chaalbaaz, and Wajood. He also worked with National Geographic.

He is younger brother of renowned film Editor Late Deven Mishra who passed away on 15th August before 25days. Yesterday evening left Bhubaneswar and moved to Mumbai with his family. At night he felt something and moved to the hospital.