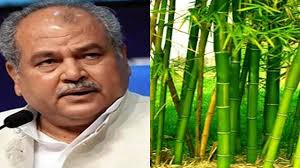 Six of 22 clusters are located in Maharashtra followed by five in Tripura, three in Odisha, two each in Madhya Pradesh and Nagaland, and one each in Assam, Karnataka, Gujarat, and Uttarakhand.

In his address at the virtual launch, Tomar said that the country is now gearing up to increase the export of bamboo products.

“Prime Minister Narendra Modi has always striven that local industries should be protected and make progress so that local artisans get a source of livelihood.

“The government’s goal in the bamboo sector is being achieved with the concerted efforts of all stakeholders of the mission. Keeping in consideration, the importance of bamboo, the Indian Forest Act, 1927 was amended in 2017 to remove bamboo from the category of trees… as a result, now anyone can undertake cultivation and business in bamboo and its products,” he added.The import policy has also been modified to ensure the progress of the bamboo industry in the country, the Minister said.

Tomar said that the use of bamboo has been an ancient tradition in India and it is now being supported with modern technology and youth are also being given training.

The Centre had in 2017 amended the Indian Forest Act 1927 to remove bamboo from the category of trees, making it possible for anyone to undertake its cultivation and do business in bamboo and its products without any felling and transit permissions outside forests.