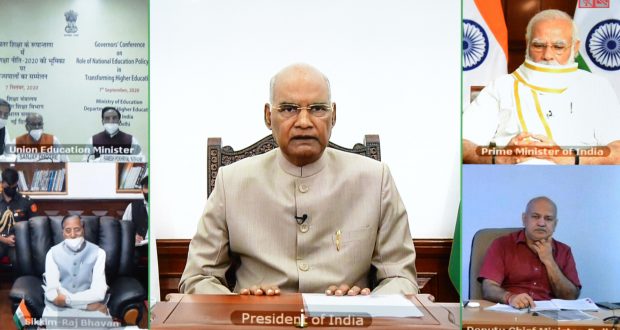 New Delhi:7/9/20: The day-long virtual Conference on the National Education Policy (NEP) got off today (September 7, 2020) with unanimity expressed by President Ram Nath Kovind, Prime Minister Narendra Modi, Union Education Minister Ramesh Pokhriyal ‘Nishank’, Governors, Lieutenant Governors, administrators and education ministers of the States/UTs that the policy is not a mere document but an attempt to realise the aspirations of the nation.

Prime Minister Narendra Modi said that it would not be correct to confine this policy to the government’s domain. “Like foreign policy or defense policy, education policy belongs to the country irrespective of the governments,” he said while initiating the discussion in his welcome address.

Concurring with this view, President Ram Nath Kovind appreciated the manner in which the policy is distilled into a coherent and effective document by drawing inferences from lakhs of suggestions from across the social spectrum. He lauded the role of Prime Minister Narendra Modi in guiding the policy towards the goal of making the country a “knowledge hub”.

Prime Minister Narendra Modi welcoming the President at the Conference of Governors on National Education Policy said that this event is very significant in the process of implementing the new education policy. He said that NEP is being welcomed by all because people have accepted it as their own.  It is this acceptance which is the bedrock for the success of any policy. Pervasive participation and contribution have led to the ownership of this policy, he added. He further said that this policy not only related to education but also prepares India for the new social and economic changes of the 21st century. It prepares the country to be self-reliant in tune with the policy of Atmanirbhar Bharat. But, to make it a success, all doubts about NEP should be cleared.

Talking about the principles of NEP, the Prime Minister said that it emphasizes upon learning and focus on research rather than curriculum and practical performance, access, and assessment. He added that this policy is an extraordinary effort to move out from one size fits all approach which was being pursued till now. 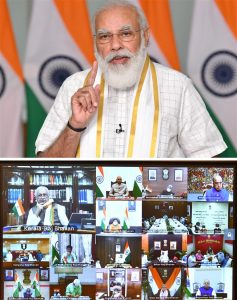 The Prime Minister stressed that it is imperative to integrate culture, language, and traditions with the learning so that the children are able to assimilate it in an integrative manner and this is precisely what the new policy endeavours to focus on. Changing from the present scenario where students are under societal pressure to pursue certain streams which may not be as per their choice, National Education Policy plans to provide a platform to students to pursue any stream as per their aptitude. In this context, vocational education exposure would also be provided to them which would also help them to gain employment skills. He observed that steps should be taken to make India the nerve center of knowledge at a global level. In this regard, the best international institutions will also be established in India. Technological solutions should be utilized for creating greater access to socially and economically disadvantaged groups. Affordable and accessible facilities for ordinary people are the priority of NEP.

The Prime Minister also emphasized that regulation has been simplified and streamlined. In fact, graded autonomy is also a step towards introducing healthy competition. It would inspire institutions to provide quality higher education. He further advised that before 25 September, virtual conference in as many Universities as possible should be held and dialogue on the implementation of NEP should be initiated.

The Prime Minister also said that this policy can be a success only when we show maximum flexibility from our side. He emphasized that this policy is of the country as a whole and not of a particular government. The policy, he reiterated, is the result of aspirations of the people and hence all steps should be taken to implement the National Education Policy in letter and spirit.

Addressing the Conference, the President of India, Shri Ram Nath Kovind said that National Education Policy (NEP) will take the country, especially the youth forward in accordance with the needs and aspirations of the twenty-first century. Congratulating the Prime Minister for his visionary leadership and inspiring role in shaping this historical document, he also appreciated Dr. Kasturirangan and Ministers as well as the officials of the Education Ministry for giving shape to National Education Policy through an elaborate process which took into consideration more than two lakh suggestions received from 2.5 lakh gram panchayats, more than 12,500 local bodies and about 675 districts. If changes are effectively brought about, India will emerge as an education superpower, he added.

Briefing the Governors about NEP, President Kovind said socially and economically disadvantaged groups (SEDGs) have been given priority in this policy through various initiatives. It includes providing foundational literacy and numeracy to all children at the primary school level by 2025.

Reiterating the role of teachers in NEP, President Kovind said that teachers will have a central role in the new education system, the most promising people being selected for the teaching profession. With this perspective, a new and comprehensive curriculum for teachers’ education will be formulated by next year, he said.

President Kovind concluded with the observation that such contribution by the Governors and Education Ministers will be helpful in transforming India into a ‘Knowledge Hub’. 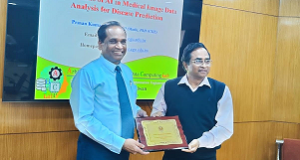 AIIMS Bhubaneswar to join hands with Chang Gung University, Taiwan over use of Artificial Intelligence 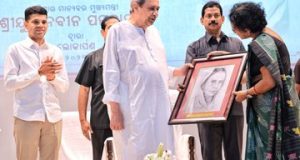 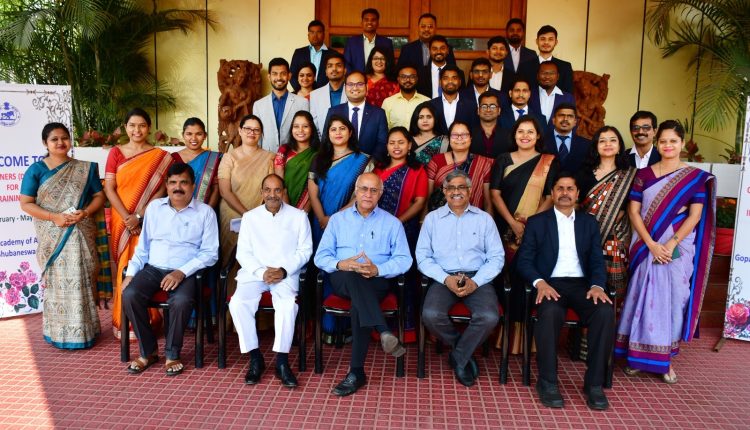 Bhubaneswar:8/2/23: An induction training programme of 31 OAS officers trainees was inaugurated by R. Balakrishnan, Chief Advisor, CMO at the Gopabandhu Academy of Administration here on Wednesday. The event was ...