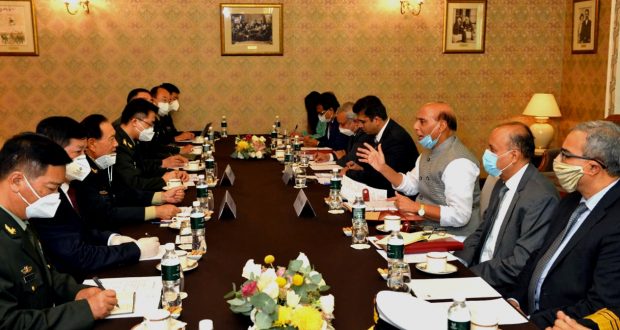 The Union Minister for Defence, Shri Rajnath Singh meeting his Chinese counterpart General Wei Fenghe on the sidelines of the Joint Meeting of the Heads of Defence Ministers of Shanghai Cooperation Organisation (SCO), Commonwealth of Independent States (CIS) and Collective Security Treaty Organisation (CSTO) members countries, in Moscow on September 04, 2020.

Moscow;5/9/20: Raksha Mantri Shri Rajnath Singh met General Wei Fenghe, State Councillor and Defence Minister of China on 4th September in Moscow on the sidelines of the Shanghai Cooperation Organisation (SCO) meeting. The two Ministers had frank and in-depth discussions about the developments in the India-China border areas as well as on India-China relations.

Raksha Mantri categorically conveyed India’s position on the developments along the Line of Actual Control (LAC) including in the Galwan valley in the Western Sector of the India-China Border Areas in the last few months. He emphasised that the actions of the Chinese troops, including amassing of a large number of troops, their aggressive behaviour and attempts to unilaterally alter the status quo were in violation of the bilateral agreements and not in keeping with the understandings reached between the Special Representatives of two sides. Hon’ble RM stated clearly that while the Indian troops had always taken a very responsible approach towards border management, but at the same time there should also be no doubt about our determination to protect India’s sovereignty and territorial integrity.

State Councillor and Defence Minister of China said that both sides should scrupulously implement the consensus reached between Prime Minister Modi and President Xi Jinping and continue to solve the issues through dialogue and consultation, strictly follow the various bilateral agreements, strengthen the regulation of frontline troops and not undertake any provocative actions that might escalate the situation. The two sides should focus on the overall situation of India-China relations and work together to de-escalate the situation as soon as possible, and maintain peace and tranquillity in the India-China border areas. The Chinese Defence Minister suggested that both sides should maintain communication at all levels including between the two Ministers.

Raksha Mantri said that both sides should take guidance from the consensus of the leaders that maintenance of peace and tranquillity in the India-China border areas was essential for the further development of our bilateral relations and that two sides should not allow differences to become disputes. Accordingly, the two sides should resolve the ongoing situation and outstanding issues in the border areas peacefully through dialogue. The Chinese Defence Minister conveyed that Chinese side too desired to resolve the issues peacefully. Raksha Mantri advised that it was important therefore that Chinese side should work with the Indian side for complete disengagement at the earliest from all friction areas including Pangong Lake as well as de-escalation in border areas in accordance with the bilateral agreements and protocols on the maintenance of peace and tranquillity in border areas, strictly respect and observe the line of actual control and should not make attempts to unilaterally change status quo. He further said that the current situation should be handled responsibly and that neither side should take any further action that could either complicate the situation or escalate matters in the border areas. Raksha Mantri conveyed that the two sides should continue their discussions, including through diplomatic and military channels, to ensure complete disengagement and de-escalation and full restoration of peace and tranquillity along the LAC at the earliest.

2020-09-05
Editor in chief
Previous: Ranking of states based on implementation of Business Reform Action Plan for the year 2019 declared
Next: CHSE declared the results of Plus II Arts Examination-2020