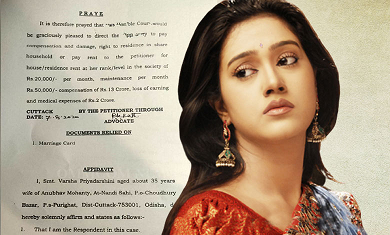 Cuttack:5/9/20 Ollywood actress Barsha Priyadarshini has filed a case of domestic violence against her husband and BJD  MP from Kendrapara, Anubhav Mohanty in the SDJM court in Cuttack.

The case was filed under Section 12 of the Protection of Women from Domestic Violence Act against the MP for allegedly assaulting and harassing Barsha. In her petition, Barsha has appealed to the court seeking maintenance from Anubhav.

According to sources, Barsha has alleged that Anubhav is a habitual drunkard and he often drinks with his friends at home. The MP also assaulted and harassed her mentally, she alleged.

The actress further alleged that whenever she tried to prevent Anubhav from drinking, he would get violent and physically assault her and tried to throw her out of the house.

Leveling another serious allegation, she said Anubhav has extramarital affairs with multiple women from the Ollywood industry. Reports said that the actress has demanded monthly maintenance of Rs 70,000 and Rs 13 crore towards compensation and health insurance.

As per the official website of the District Courts, the first hearing of the case is scheduled to be held on September 7.