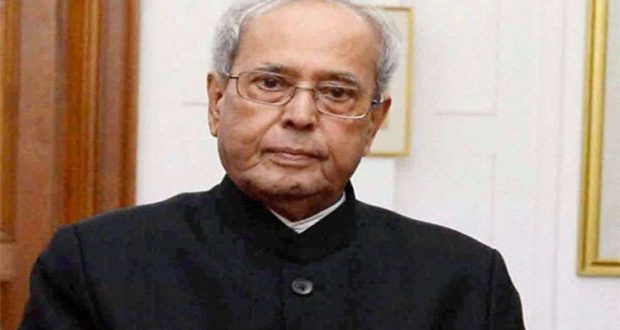 Former President Pranab Mukherjee passes away: seven days of State mourning will be observed throughout India

in National August 31, 2020 Comments Off on Former President Pranab Mukherjee passes away: seven days of State mourning will be observed throughout India 429 Views

New Delhi:31/8/20:Former President Pranab Mukherjee is no more. He breathed his last at Army Hospital in New Delhi this evening. He was 84. His son Abhijit Mukherjee informed this through Twitter.

He said Mr. Pranab Mukherjee passed away in spite of the best efforts of doctors of Army R&R Hospital and prayers, duas, and prarthanas from people throughout the country.

Mr. Mukherjee served as 13th President of India from 2012 to 2017. He also served as Union Minister of Finance, Defence, External Affairs and Commerce.

AIR Correspondent reports, Pranab Mukherjee, a man of humble origin, was born in the small village of Mirati in Birbhum District of West Bengal as the son of freedom fighters, Kamada Kinkar Mukherjee and Rajlakshmi. He acquired a Master’s degree in History and Political Science as well as a degree in Law from the University of Kolkata. He then embarked on his professional life as a college teacher and journalist.

Inspired by his father’s contribution to the national movement, Mr. Mukherjee in 1969 plunged into full-time public life following his election to the Upper House of the Parliament. Under the mentoring of late Prime Minister Indira Gandhi, Mr. Mukherjee’s rise in his political career was rapid. He served as Union Minister of Finance, Defence, External Affairs, and Commerce. Mr. Mukherjee was also Deputy Chairman of the Planning Commission. He was elected to Rajya Sabha five times and twice to Lok Sabha.

Mr. Mukherjee served as the Leader of both houses of Parliament. He had extensive diplomatic experience and served on the Board of Governors of the IMF, World Bank, Asian Development Bank, and African Development Bank. Mr. Mukherjee was instrumental in spearheading critical decisions of the Government on a range of issues such as Administrative reforms, Right to Information, Right to Employment, Food Security, Energy Security, Information Technology and telecommunication, and setting up of UIDAI.

He was a member of the Congress Working Committee, the highest policy-making body of the Party for a period of 23 years. A powerful orator and scholar, Mr. Mukherjee’s intellectual and political prowess as well as remarkable knowledge of international relations, financial affairs, and parliamentary processes are widely admired. He has been acclaimed for his role as a consensus builder on difficult national issues through his ability to forge unity amongst the diverse political parties that form part of India’s vibrant multi-party democracy.

As a mark of respect to former President Pranab Mukherjee, seven days of State mourning will be observed throughout India from today till 6th September. During the period of State Mourning, the National Flag will fly at half-mast on all buildings throughout India, where it is flown regularly and there will be no official entertainment.

2020-08-31
Editor in chief
Previous: 15th META concludes three weeks of celebrating stagecraft with a virtual award ceremony
Next: Centre Health Ministry has decided to depute high-level Central teams to to 4 States seeing a sudden surge in the number of COVID cases