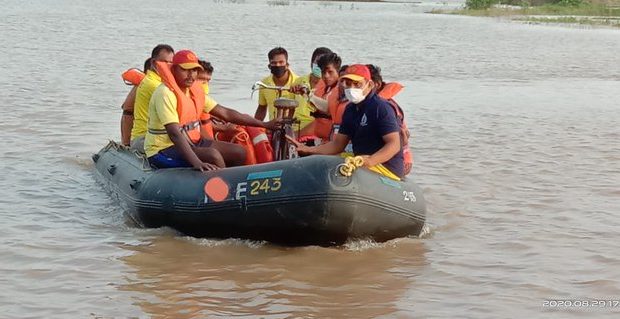 Cuttack:30/8/20: Odisha Fire Service personnel have rescued 810 persons including a pregnant woman and sick person from flood-affected regions in the state.

Minister of State, Energy, Industries Micro, Small and Medium Enterprises, Home Dibyasankar Mishra visited different fire stations of Kendrapara district and reviewed the preparedness and deployment of the rescue teams in different areas of the district.

Dr. Satyajit Mohanty, DG of Police, Fire Service, Home Guards & Civil Defence had asked the officials to closely monitor the flood situation in Mahanadi basin and mobilised necessary manpower and logistics for rescue and evacuation of the affected people.

The authorities have asked seven teams of Puri district to remain on standby for any eventuality.  Twelve teams are kept on standby at Odisha Fire and Disaster Response Institute, Naraj for immediate deployment.