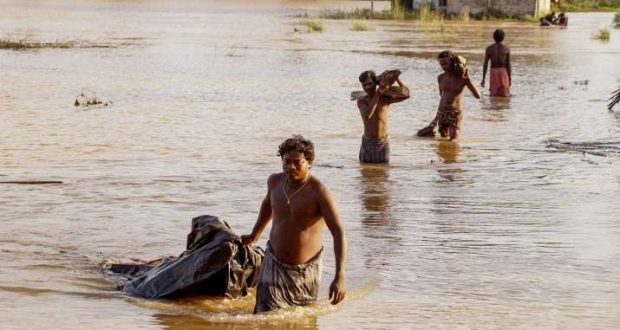 Bhubaneswar30/8/20:: The death toll in the floods is 17 and over 14 lakh people affected in 20 districts of Odisha, according to the situation report by the state government.

As per the provisional situation report, 112 blocks, 896 Gram Panchayats, 3256 villages, 21 Urban Local Bodies, and 75 Wards were affected in the ongoing flood situation.

Besides, 340 villages and a population of 2,65,723 were marooned due to flood situation. The authorities said 357 free kitchens/centers were opened on Sunday covering 57,824 beneficiaries in the affected region.

The report said a total of 45 medical and 42 veterinaries, 14 NDRF, 17 ODRAF, 22 Fire Services teams, and 254 boats were pressed into service in the affected areas.

The floods have devastated 107 roads cutting off communication in 11 districts and breaches in 32 river embankments were reported in five districts.

2020-08-30
Editor in chief
Previous: Odisha Fire Service personnel have rescued 810 persons from flood-affected regions in the state
Next: Odisha Chief Minister appealed to the MLAs to ensure the safety of JEE and NEET examinees