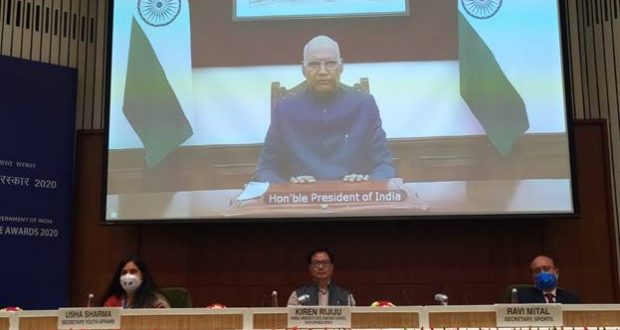 The President was happy to note the increased diversity of sports in our country. He said that today’s award winners represent more than 20 sports. The growing popularity of our traditional games like Kabaddi, Kho-Kho, and Mallakhamb will help in connecting the common people with sports. Today, apart from Cricket and Football, league tournaments of sports like Volleyball and Kabaddi are gaining popularity which is a pleasant change.

Union Minister of Youth Affairs and Sports Shri Kiren Rijiju said that I would like to thank the President of India for honouring the award winners in this very special function, which is taking place virtually because of the coronavirus pandemic. The Minister explained that this is the first ever virtual awards presentation function where the awards have been conferred by the Hon’ble President of India. The Rajiv Gandhi Khel Ratna Award, the highest sporting honour of the country is given for spectacular and outstanding performance in the field of sports by a sportsperson over a period of four years. There were five winners of the award this year, cricketer Rohit Sharma, wrestler Vinesh Phogat, table tennis player Manika Batra, hockey player Rani Rampal and Para-athlete Mariyappan Thangavelu.

The Arjuna Award is given for consistent performances over a period of four years, amongst the winners this year were shooters Saurabh Chaudhary and Manu Bhaker, wrestler Divya Kakran, boxer Lovlina Borgohain and badminton stars Chirag Shetty and Satwiksairaj Rankireddy.