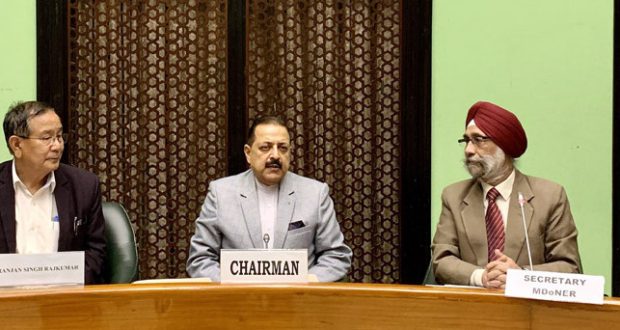 New Delhi:28/8/20:Union Minister of State (Independent Charge) Development of North Eastern Region (DoNER), MoS PMO, Personnel, Public Grievances, Pensions, Atomic Energy and Space, Dr Jitendra Singh today said that three Bamboo Clusters will be developed in Jammu, Katra and Samba areas for making of Bamboo basketry, Agarbatti and Bamboo Charcol which will provide direct employment opportunities to about 25,000 people. Apart from this, a Mega Bamboo Industrial Park at Ghati near Jammu and Bamboo Technology Training Centre will also come up in the region within two years of the allotment of land by the UT of J&K administration. Addressing a review meeting of the Ministry of DoNER on further steps to be taken for augmenting infrastructure and promoting entrepreneurship in the Bamboo sector in Jammu and Kashmir after the signing of the MoU, Dr Jitendra Singh said this will be pursued as a major priority in coming days.

Dr Jitendra Singh disclosed that there are huge reserves of bamboo spread across Jammu & Kashmir and Ladakh, which have remained unexplored and largely unutilised. He said that as part of the initiatives taken at the behest of Prime Minister Shri Narendra Modi to replicate good practices of all ministries in the newly created Union Territory of Jammu and Kashmir, the North Eastern Council, Ministry of DoNER through Cane and Bamboo Technology Centre(CBTC) also took itself the technical know-how and experience in the field of Bamboo Sector in Jammu & Kashmir in the form of Workshop cum Exhibition in collaboration with the Government of Jammu & Kashmir on 11th & 12th January 2020 at State Convention Centre, Jammu.

The Minister said that the workshop has thrown light at the significant presence of bamboo green in the Jammu, Samba and Kathua region and also there exist few bamboos based micro level enterprises & entrepreneurs. He said that in the light of this, the CBTC will take up technical collaboration and partnership with the Government of Jammu and Kashmir (UT) for setting up of common facility centres, cane and bamboo technology parks, cane and bamboo industrial parks, FPO, clusters & hi-tech nurseries on BOT (Built-Operate-Transfer), turnkey basis with their funding support as the case may be in due course.

Dr Jitendra Singh said that soon a team from Ministry will again visit Jammu and explore a field training programme for Bamboo farming in the region. He said that the experience of North Eastern states will help the artisans of UT of Jammu and Kashmir to better their economic conditions and also assist in the commercial exploitation of bamboo grown in this region.

Dr Jitendra Singh said, of late Bamboo is being used in low-cost housing and as a construction material. He said that in coming years, Bamboo Awareness camps will be organized in different parts of the country in this regard.

2020-08-28
Editor in chief
Previous: PM expresses happiness over successful completion of 6 Years of PM-JDY
Next: India tests more than 9 lakh samples each day two days in a row