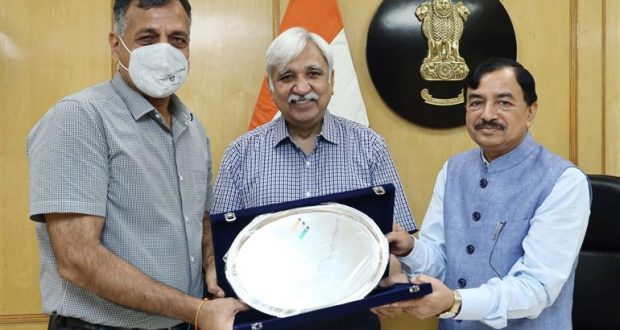 Bidding him farewell, CEC Sh Sunil Arora wished Sh Ashok Lavasa the very best ahead for meeting bigger challenges and achieving more milestones. He mentioned that ECI’s loss is ADB’s gain where Sh. Lavasa’s competence would now be available at the wider multilateral platform for the daunting task of restructuring economies in the post-Covid scenario.

On the occasion, Election Commissioner Sh. Sushil Chandra in his speech appreciated the working of Sh. Ashok Lavasa in Ministry of Finance earlier. He especially applauded Sh Lavasa for his guidance in framing of broad guidelines for elections to be held in COVID times.

Sh. Ashok Lavasa said he would remember his two and a half year stint at the Commission as a memorable experience. He acknowledged that it was a difficult choice for him whether to continue in ECI or move on to the global canvas of ADB.

The Commission also bid farewell to outgoing Director Sh Vikram Batra, Director Election Expenditure as he returns to his cadre after completing his term at Election Commission of India.

Volume VI of Landmark Judgments, a compendium of judgments delivered by Hon’ble Supreme Court and various High Courts from January 2017 to May 2019, that is, till the conclusion of Lok Sabha General Election 2019, was also released today. Commission released its e-version also https://eci.gov.in/ebooks/landmark-judgment/index.html for wider reach. It consists of 29 significant judgments covering various aspects of electoral process like nomination, affidavit, EVM VVPAT, Model Code of Conduct, corrupt practices, and other related matters. This volume also lists the judgments already published by ECI in the previous five volumes of Landmark Judgments. Additionally, the volume also lists 632 cases filed in the Hon’ble Supreme Court and Hon’ble High Courts during the period leading to General Election, 2019.

Chief Election Commissioner Shri Sunil Arora in his message said: “I harbour the sanguine hope that this publication would further illuminate us about the domain of election law and embolden the officials concerned to execute the gigantic exercise by taking solace in the fact that their actions have consistently earned the approbation of judiciary.”

Sh. Ashok Lavasa, Election Commissioner, in his message said “This volume will broaden understanding of the laws governing the vast electoral exercise of our country.”

Sh. Sushil Chandra, Election Commissioner, in his remarks hoped that this volume will benefit all citizens of the country in understanding the election process.