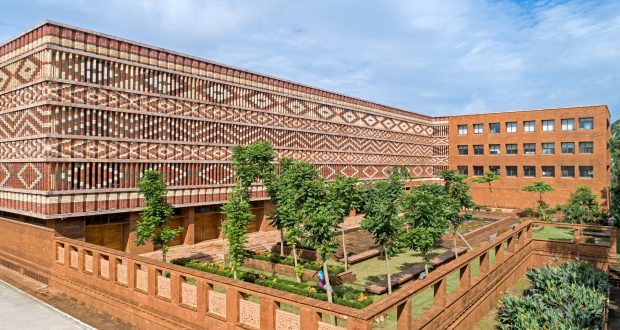 Bhubaneswar25/8/20:London-based international magazine De Zeen has featured Odisha Krushi Bhawan edifice on its latest edition. The De Zeen magazine was impressed by the architectural marvel of the agriculture headquarters of Odisha Government.

The magazine said Krushi Bhawan derives its visual identity from local materials and vernacular narratives expressed in a manner that is responsive to the local climate.

The article was published on De Zeen’s August 23rd edition entitled ‘Studio Lotus creates intricate brickwork facade for government building in India’. It has given a vivid description on the magnificent look of Krushi Bhawan located in Keshari Nagar here.

The article said: “The complex houses administrative offices for the Department of Agriculture & Farmers’ Empowerment around courtyards filled with ponds and trees. The brickwork elements that wrap the upper floor create a pattern designed to emulate Odisha Ikat, a traditional dyeing technique from the eponymous Indian state”.

The article quotes Studio Lotus as saying that Krushi Bhawan thus seeks to embody the idea of truly inclusive architecture which is created for the people and built by the people.

Chief Minister Naveen Patnaik tweeted that he is glad to know that Odisha Krushi Bhawan, inspired by Sambalpuri ikat, has become Odisha’s first building to be listed for DezeenAwards 2020.

The magazine further said that the building’s features exemplify how a government’s patronage can sustain indigenous communities and economies.

2020-08-26
Editor in chief
Previous: District administration of Cuttack decided not to allow holding of Durga Puja in any pandal/mandap
Next: Odisha chief minister has urged to postpone the JEE Main and NEET 2020.