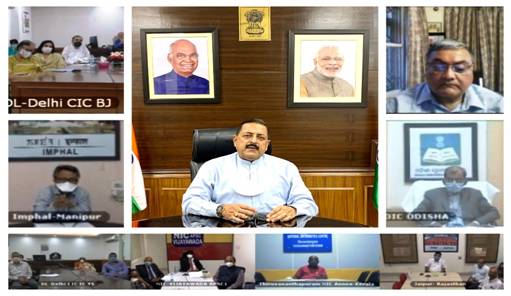 RTI is fully functional in Jammu and Kashmir: Dr.Jitendra Singh

New Delhi:24/8/20:Union Minister of State (Independent Charge) Development of North Eastern Region (DoNER), MoS PMO, Personnel, Public Grievances, Pensions, Atomic Energy and Space, Dr. Jitendra Singh said that the RTI disposal rate had remained unaffected by the pandemic and during certain given intervals of time, the disposal rate was even higher than the usual. Addressing a meeting of the CIC and State Information Commissioners, Dr.Jitendra Singh said that ever since Modi Government came into power in 2014, Transparency and Citizen-Centricity became the hallmark of the Governance Model. He said that in the last six years, every conscious decision was taken to strengthen the Independence and Resources of the Information Commissions and all vacancies were filled as fast as possible.

Referring to statistical figures, Dr.Jitendra Singh said that the rate of RTI disposal remained unaffected by the pandemic and from March to July 2020, disposal of cases by Central Information Commission was almost equal to the preceding year.

He added that in June 2020, the RTI disposal rate was higher than June 2019 and everyone took note of that. This reinforced vigor proved to society and the notion that nothing can deter the working of Prime Minister Narendra Modi Government, he added.

Dr.Jitendra Singh also suggested that the Information Authorities should ponder to avoid the avoidable RTIs and underlined that almost all information today is in public domain. He also added that avoidance of duplication and misguided RTIs will lead to a reduction in pendency and workload and will enhance efficiency