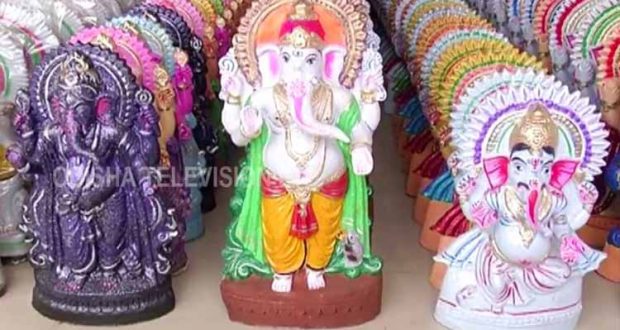 in District Diary, Smartcity Bhubaneswar August 20, 2020 Comments Off on Orissa High Court has directed the authorities to take a decision on holding Ganesh Puja in the twin cities 902 Views

Cuttack/Bhubaneswar:20/8/20: The Orissa High Court has directed the authorities to take a decision on holding  Ganesh Puja in the twin cities of Cuttack and Bhubaneswar.

Bibhuti Choudhury, petitioner’s counsel, told reporters here on Thursday that the court has asked to approach the authorities take a holistic decision on the matter.

Choudhury said that the puja committees of the city will meet the Collector and submit a representation to allow community celebration of Ganesh Puja.

He said that he is hopeful that the Collector would take a positive step in this direction.

The High Court’s observation came during the hearing on the public interest litigation (PIL) filed by one Sibendra Kumar Hati (65) of Buxi Bazar, Baniasahi, Cuttack who is also the President of Cuttack Nagar Budha Ganesh Committee.

Hati had challenged the order of the Police Commissioner of Bhubaneswar-Cuttack to stop Ganesh Puja in the twin cities terming the decision of the latter as illegal and arbitrary.

The Commissionerate Police on August 13 had said that no community Ganesh puja will be allowed this year in view of the pandemic. No permission has been given to puja mandaps in Cuttack and Bhubaneswar to celebrate Ganesh Chaturthi on August 22, the order said.

2020-08-20
Editor in chief
Previous: Nominations for Sardar Patel National Unity Award extended till 31st October 2020
Next: Odisha has been placed among the top six states in India as far as best performing states in the COVID positivity rate is concerned.